Newly-minted top 10 star Ash Barty, undefeated in a month, is thrilled to be back at home and is ready for the force of the Belarusian squad. 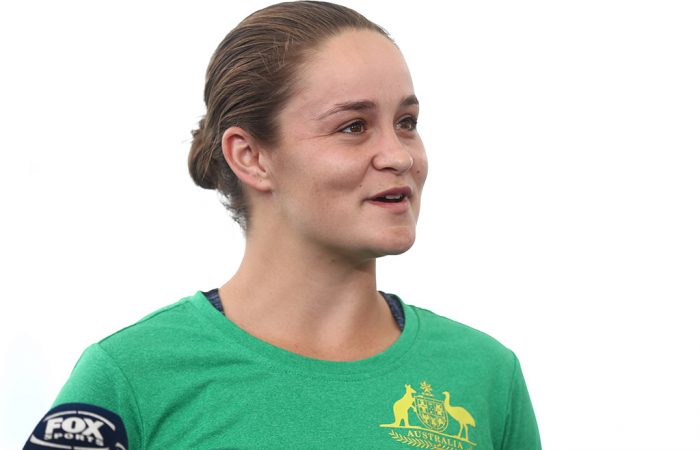 Ash Barty is back in Brisbane, riding a seven-match winning streak and full of confidence after her recent title run in Miami.

The world No.9 spearheads the Australian Fed Cup team which takes on Belarus this weekend with a spot in November’s final looming as the reward.

After meeting local Indigenous youth at Queensland Tennis Centre on Tuesday, Barty fronted the media and said there was a good feeling among the Australian squad as it aimed for its first Fed Cup final in 26 years.

.@ashbar96 was a hit with local Indigenous youth in Brisbane – and they even scored free racquets from the world No.9! pic.twitter.com/4NLOgomf77

“Obviously we still have a long way to go; it’s been a bit of a work in progress for us the last two or three years to put ourselves in this position to have the chance to make another final,” she said.

“I can guarantee that all four of us, and all of the wider team as well, are doing everything possible to give ourselves a chance, and no matter who plays on the weekend, we’re gonna give it a crack, we’re gonna try our best. And win or lose, we can hold our head high.

“These weeks in Fed Cup are really special – you only get to do it a couple of times a year. So for all of us it’s about trying to make the most of the opportunity, going out there and enjoying it and then trying to play our best tennis.”

Those four players she references are herself, Daria Gavrilova, Sam Stosur and Priscilla Hon, who since yesterday have been training diligently at Pat Rafter Arena in preparation for the tie.

“We’re all striking the ball well, we’re all very familiar with this court,” Barty said.

“It’s nice to come here on Pat Rafter Arena, and we know that we can play our best tennis on that court. For us it’s about dotting every I and crossing every T and trying to do the right thing, so that come Saturday and Sunday we’re ready to go.”

Yet while that quartet forms an impressive Fed Cup force, Barty acknowledged the Belarusian team were a massive threat.

STOSUR: Fed Cup can bring out the best in me

Add to that list Aliaksandra Sasnovich, the world No.35 with a history of strong performances in Brisbane, and the task of stopping the visitors becomes even more challenging.

“I played her (Sabalenka) in the Australian Open two years ago, and she’s a different person and different player to what she was then. Absolutely a force to be reckoned with – she’s one of the elite of our sport and she has a very destructive game and can be very powerful, can take the game away from you,” Barty noted.

“The way that she’s been able to lead the Belarusian team into a final two years ago, and now back to a semi, with some pretty good company around her, they’re a hell of a team.

“I think they have options. They really do. Vika’s not here yet … obviously been close with her in the last month or so. She hasn’t quite arrived, but they have so many options for both singles and doubles. I think it will come down to match ups, who’s hitting the ball better, who’s healthy, things like that.“

Thankfully, Barty is in the form of her life, and no doubt Belarus will be wary of the strength she brings to the Australian side.

The 22-year-old is a stellar 18-3 in 2019; before winning the title in Miami, she reached the Sydney final, the Australian Open quarterfinals and the last 16 at Indian Wells.

And although the conditions in Brisbane may be different to the ones in which she thrived in Miami, she has a vast reservoir of confidence which she can tap into.

“You have to take the confidence; it was one of the best weeks of my career. I struck the ball better than ever and played some really solid matches,” Barty reflected.

“It’s a fresh week. Fed Cup weeks are those that I look forward to the most during the season. It’s always on my schedule.

“I train here every day so it’s nice to be back on a really familiar court. It’s been a while since I’ve played a competitive match in Brisbane but there’s certainly nothing better, and hopefully we can have a full crowd on the weekend and really fill out the stadium.”