With a talent that’s matched by a sizeable work ethic, the fast-rising Alexei Popyrin already shares much in common with legends he aims to emulate. 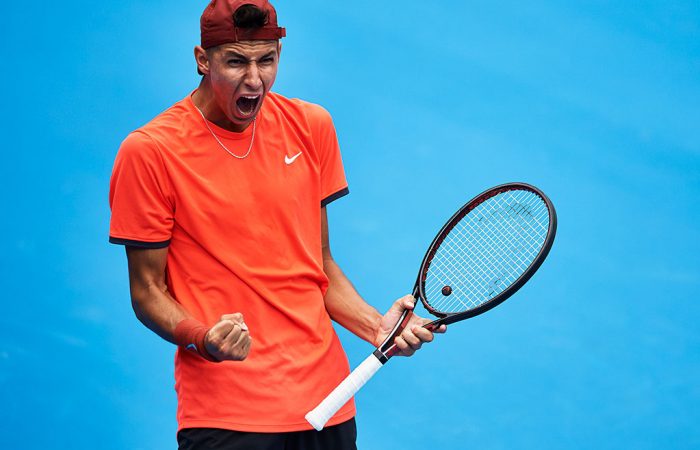 Not many rising stars on the ATP Tour could claim to have shared a court with Grand Slam superstar Serena Williams; Alexei Popyrin, though, has not only trained with the prolific champion but also thrived in her company.

“Just to hit with a legend, especially Serena, it really gave me a great, great experience,” said the 19-year-old when quizzed during the Australian summer about the time he spent with Serena at the Mouratoglou Tennis Academy, where Popyrin has also had opportunities to learn from the likes of Novak Djokovic, Dominic Thiem, Stefanos Tsitsipas and David Goffin.

In many ways, Popyrin appears at home among such elite players – and not just for the fact that his power-packed game, built around a huge serve and forehand, draws inevitable comparisons to his long-time hero Juan Martin del Potro.

In 2017, a 17-year-old Popyrin joined a group of just five Australian men – including Ken Rosewall, Roy Emerson, John Newcombe and Phil Dent – as the winner of the French Open boys’ title.

And if recent progress is a measure, Popyrin is almost certain to soon emulate those legends at a higher level. A breakthrough Challenger title in Jinan, China, last August provided the foundation for further progress; Popyrin subsequently qualified for tournaments in Stockholm and Basel. Victory over countryman Matt Ebden in the first round of the latter provided Popyrin’s first main draw match win on the ATP Tour.

It was the recent Australian summer, though, that proved most headline-grabbing.

Capitalising on a wildcard entry into his home Grand Slam, Popyrin stunned Mischa Zverev and 2018 French Open finalist Dominic Thiem, before exiting to eventual semifinalist Lucas Pouille in a thrilling five-set battle. Alongside countryman Blake Ellis, he also progressed to the third round in doubles.

“The Aussie summer was a dream, especially the AO. Going in, I never expected to play the way I did in both singles and doubles,” Popyrin told Australian Tennis Magazine of that performance, which paved the way for his Davis Cup debut for Australia.

“I think it showed that I’m able to compete on the big stage and also gave me a great deal of confidence.”

It’s clear that lessons gleaned from some influential figures – Serena’s advice, said Popyrin, was “to stay focused (and) keep concentrated during this period” – have been valuable. So too has the commitment that Popyrin has maintained since winning the French Open boys’ title.

“I don’t think I’ve really changed as a player,” Popyrin reflected. “I’ve more developed into the game that I wanted to play. Of course, I’ve become more mature and professional on and off the court, but I think that comes with age. Where I think my game has really developed is in consistency especially on my backhand side.”

Those developments are helped by a whatever-it-takes attitude, which was arguably best demonstrated through Popyrin’s dedication on the ATP Challenger Tour last season.

With his travels taking him to France, Italy, Tunisia, Poland, Kazakhstan, China, South Korea and America – among other nations – Popyrin qualified for five events, including at Jinan, where he won eight matches before lifting the trophy.

“It was very important for me to build my game on the Challenger level,” said the teenager. “I feel like I got a lot of match experience against very good players and that really prepared me and gave me the confidence to be able to play in the biggest tournaments in the world.”

As he gains experience on the ATP Tour, Popyrin is also benefitting from a work ethic that’s always come naturally. The oldest son of Russian-born parents Alex and Elena, Popyrin was raised in Sydney, where he first experienced tennis at the Kim Warwick Tennis Academy as a five-year-old. A two-year stint in Dubai was beneficial for both training purposes and its proximity to Europe, Popyrin also serving as a ballboy at the ATP tournament in the city. In 2010, he relocated to Spain (first Alicante, then Marbella) to further his claycourt development.

“I love competing on clay because to win matches there has to be a lot of variety and physicality,” explains Popyrin, who at 196 cm can count movement as one of his playing strengths. “My game doesn’t really suit clay, but I love the grind and that’s why I think I have good results on clay.”

There’s also the benefit of years spent at the renowned academy of Patrick Mouratoglou, in Nice, which remains a regular training base. “My time at Mouratoglou Tennis Academy is probably what has shaped how I am as a tennis player today,” said Popyrin. “I came to the academy without a coach and wasn’t really happy with how my game was progressing but when I came to the academy, they welcomed me with open arms and have really helped me a lot.”

It’s unsurprising that Mouratoglou is equally complimentary. “What I like is that he has huge weapons,” the high-profile coach commented after Popyrin’s 2017 French Open boys’ triumph. “And you see also huge margin for improvement.”

Those improvements have not only eventuated, but quickly elevated Popyrin into the game’s upper echelons. At a career-high world No.119 at the timing of writing, Popyrin enters the claycourt season with the chance to add to his quickly accumulating milestones. But while the top 100 is most tantalising within reach, the teenager maintains a level-headed approach to his progress.

“I just want to keep improving and working on my game as hard and as much as I possibly can,” he emphasised. “And if I continue to do so I feel like I can really have a ranking boost.”

This article appears in the April/May 2019 issue of Australian Tennis Magazine.