Ash Barty's coach Craig Tyzzer points to his player's coachability and willingness to learn from losses as key factors in her run to the title in Miami. 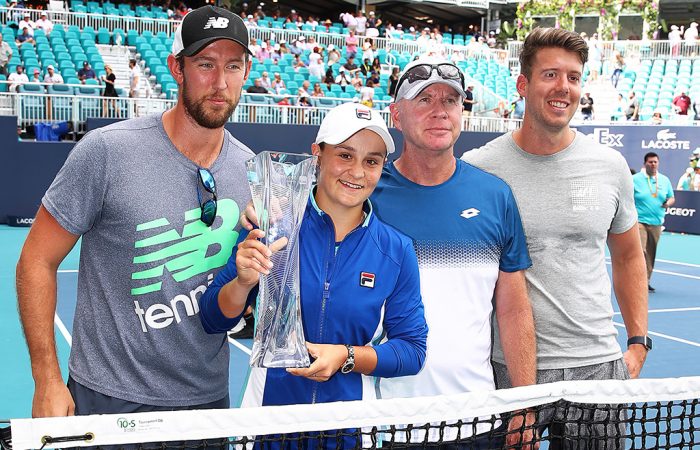 Ash Barty refers to a loss at Wimbledon last year that proved a turning point, allowing her to attain the heights she has in the women’s game.

Yet her coach, Craig Tyzzer, points to another loss that helped pave the way for his charge’s spectacular run to the Miami Open title.

Since losing to Daria Kasatkina at Wimbledon last year, Barty has been one of the best-performed players in the women’s game, and next week will debut in the world’s top 10.

But it was perhaps her loss to Elina Svitolina two weeks ago at Indian Wells that was more resonant.

Barty held five set points in the opening set and led 3-1 in the final set of her fourth-round match against the Ukrainian, but went down 6-4 in the third; a loss that prevented her from cracking the top 10.

“It was a big loss for her,” Tyzzer told Brett Phillips of SEN’s The First Serve.

“She was looking forward to playing it and set herself for a good performance, and she did, and she just didn’t finish it off when she needed to, and she was pretty harsh on herself for that.

“We sort of switched off directly after it; we went through the match and talked about it, and then we went and played golf and just forgot about it. And then started preparing for here and getting ready.”

Barty was forced to battle all sorts of factors and conditions during the Miami fortnight.

There were several rain delays, a new tournament home to adapt to, a range of different opponents and playing styles, and even her own physical health.

“She’s got an issue with her foot. And she actually struggled through the first round here, wasn’t sure if she was going to play,” Tyzzer revealed.

“So it’s a big testament to her character, because even the other day with the rain delays, to stay as fresh as she was and to be up and ready, it’s a big change for her.

“In the past that might have been all too hard for her and it would have pushed her to the brink, but she handled everything that’s been thrown at her this tournament, which is great.”

Instead of playing in Charleston next week, Barty will fly home to Queensland to rehabilitate her foot before turning her attention to Australia’s Fed Cup semifinal against Belarus in Brisbane on 20-21 April.

But before doing that, there was a celebration with her team at Hard Rock Stadium.

Tyzzer said the fortnight in Miami was satisfying and encouraging on several levels.

“She’s put a lot of work in to get to this level, and to string it all together and end up with that sort of performance when she’s tired and struggled through here, I think is really good and holds her in good stead for the rest of her career,” he observed.

“Basically every match we go through, it’s about how she can match up against that particular player and try and develop and get her game to work best against her opponent. “Against Petra Kvitova here, she’d never beaten her before; we changed a few things and got Ash to do a few things differently, and it worked really well.