In the longest match of the WTA season so far, Ash Barty falls to Elina Svitolina in a three-set epic in the fourth round at Indian Wells. 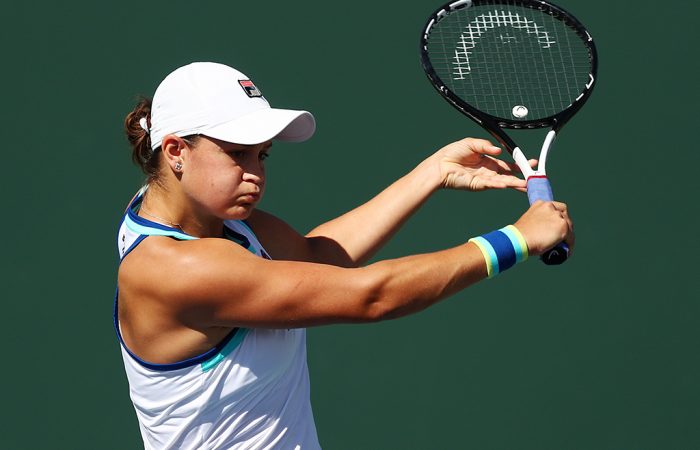 Ash Barty has lost a heartbreaking fourth-round encounter to Elina Svitolina at Indian Wells, battling for three hours and 12 minutes only to fall to the No.6 seed.

Had she won, Barty would have cracked the top 10 when next week’s rankings are released.

.@ElinaSvitolina takes the longest match of the 2019 season!

Svitolina has become something of a bogey opponent for Barty, extending her winning head-to-head record over the Australian to 5-0 with her latest triumph.

She goes on to face Marketa Vondrousova, who earlier stunned No.2 seed Simona Halep for her first top-10 victory.

Barty, meanwhile, is projected to rise to a career-high ranking of No.11 following the Indian Wells fortnight.

And she fought incredibly hard against Svitolina on Tuesday; Svitolina served for every set, only for Barty to break back each time.

Barty won eight straight points to take a 6-5 lead in the first set, and held a set point in the 12th game, only for Svitolina to hold and send the set to a tiebreak.

There, Barty opened a 6-3 lead and would eventually hold a fifth set point at 7-6, but couldn’t convert.

Svitolina served for the match at 5-3 in the second set and despite dropping serve held two match points in the following game, which Barty saved with daring, forcing play.

She would win the final four games of the set to send the match to a decider, where she leaped out to a 3-1 lead as Svitolina required a medical timeout to treat a knee problem.

Shot! One of the finest you'll see 👀

Svitolina reeled off four straight games to move ahead 5-3 as Barty’s game unravelled in errors.

The Queenslander broke straight back and then erased another two match points in the following game, yet handed Svitolina a fifth when she sent a forehand wide.

The world No.6 clinched it when Barty hit her final forehand into the net.