Olivia Rogowska extends her impressive record in the nation’s capital, claiming the Canberra #2 title on Sunday. 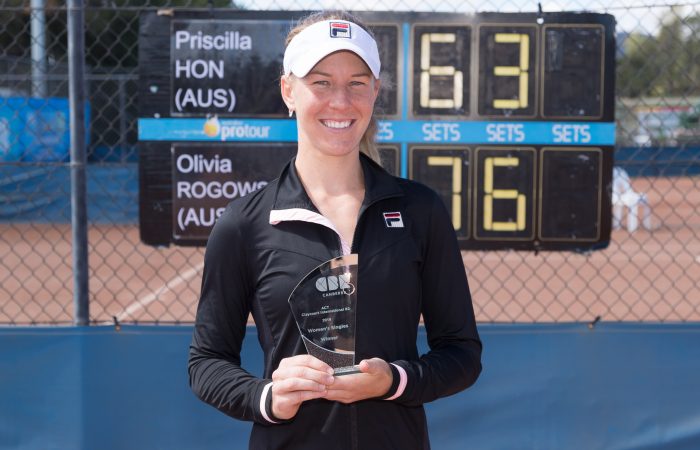 Unseeded Olivia Rogowska took the ACT Claycourt International #2 title on Sunday with a 7-6(6) 6-3 victory over top seed and world No.136 Priscilla Hon.

Hon, who was in dominant form all week and was yet to drop a set on her way to the final, came out firing, breaking early before Rogowska surged to a 5-3 lead. However, Hon fought back to take the first set to a tiebreak.

Rogowska stood firm to take the first set, and while there were multiple breaks in the second, it was again the Victorian who held her nerve to close out the match.

“Priscilla’s been playing extremely well so I knew it was going to be very tough today,” Rogowska said. “I played well on the important points and that’s really what got me through. After that first set, which could have gone either way, I was just really happy to close it out.”

The 27-year-old now boasts an impressive 17-2 record from her last four outings in Canberra, which includes winning the Apis Canberra International 2017 title – and a semifinal showing last week.

“Coming into these two weeks my goal was to be as professional as I could with my routine, be as tough as possible, and try and get as many matches as I could. I achieved all of that and its great preparation for the rest of the year,” she said.

Rogowska will now head to the United States for a series of claycourt events.