Capturing the biggest of four career titles at the Miami Open, Ash Barty reflects on the journey that has seen her reach the upper echelons of the game. 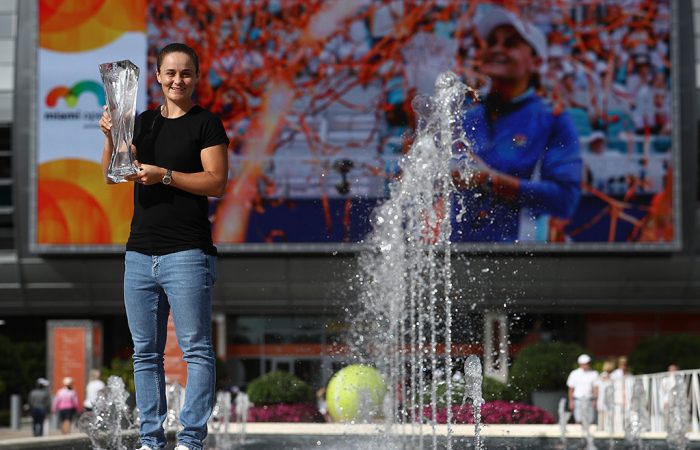 Ash Barty’s triumph at the Miami Open has placed the Australian in somewhat of a reflective headspace.

The 22-year-old defeated Karolina Pliskova 7-6(1) 6-3 to claim the fourth – and biggest – title of her burgeoning career, and capped a memorable fortnight during which she also cemented her rise into the world’s top 10.

Given all of the milestones she accrued during the Miami Open fortnight, the spotlight was again shone on her comeback narrative.

To put the achievement in context, @ashbar96's victory at the #MiamiOpen marks the biggest singles title won by an Australian player, male or female, since Sam Stosur won the US Open in 2011. #GoAussies

Few players have stepped away from the game in the manner she did and for that length of time, and then returned to achieve what she has.

Barty was asked about that journey when she fronted the press following Saturday’s final in Miami.

“I needed to take the break. Otherwise I don’t think that I’d still be playing the game, to be honest,” she said, referring to her near two-year tennis hiatus as a teenager.

“It’s been a beautiful two or three years since I have been coming back into the sport. I have been certainly able to grab my opportunities with both hands. I have had some heartbreaking losses but also some pretty amazing moments, too.

“Certainly feel like I’m a very different person. I feel like I’m a more complete player, I’m a better player. I have been able to put myself into more high-pressure situations and in bigger matches.”

Barty’s run in Miami was especially impressive given the calibre of opponents she beat along the way.

She opened with a win against fast-rising teenage star Dayana Yastremska and then beat countrywoman Sam Stosur, a player she’d never before beaten.

In the fourth round she extended her winning record against world No.8 Kiki Bertens to 4-0 before scoring her first win over two-time major champion Petra Kvitova, the result that clinched her entry into the top 10.

There was no let-down when she faced 21st seed Anett Kontaveit – a player she was favoured to beat – in the semifinals.

And then there was her triumph over a third top-10 star in Pliskova, who was a sparkling 21-4 in 2019 ahead of the final.

“It’s just been an amazing two weeks. It really has. I feel like we have jumped over a few hurdles this week,” Barty said. “We have been able to make the most of some situations that I put myself in.

“I think first and foremost I feel like my game has become more well-rounded. I feel like I’m more exposed to pressure situations and am learning how to deal with it and how to enjoy it more.

“When I can go out there and play my brand of tennis, that’s when it becomes most exciting and most enjoyable for me. I’m being able to do that more and more often.”

A year ago, Barty left the Miami Open ranked 18th.

On Monday, she’ll rise to world No.9.

And ever since Wimbledon – where she lost to Daria Kasatkina in the third round, a result she described as a “turning point” – she has been one of the form players in the game.

This year alone, the Australian has built a win-loss record of 18-3, reaching the final in Sydney and the quarterfinals of the Australian Open before her breakthrough run in Miami.

She has won five of eight matches against top-10 opposition, posted a 2-0 record this season against the top five, won 25 of her past 30 matches and reached the quarters or better at five of her past six events.

“I think the best thing is I do feel like I belong on this tour. I feel like when I play my best, I’m good enough to match it with the very best in the world,” Barty said.

“I just need to keep giving myself the opportunity to challenge myself and play against the best in the world.

“Some days it will go in your favour and some days it won’t. I think the challenge and the beauty is to just keep going and putting one foot in front of the other and enjoying the journey.”