Barty to play Kontaveit for place in Miami Open final

Ash Barty will take on Anett Kontaveit for the first time in almost five years, with a place in the Miami Open final on the line. 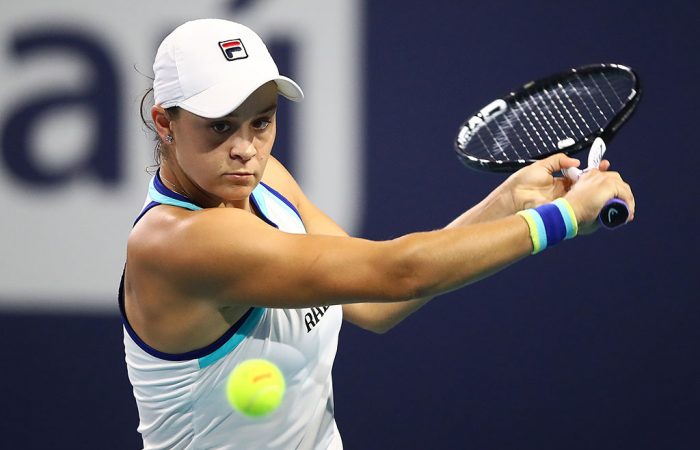 Ash Barty will face 21st seed Anett Kontaveit on Friday morning (AEDT) for a place in the Miami Open final.

Barty has not faced the Estonian in almost five years; in their last meeting, Kontaveit beat the then 18-year-old Barty in three sets in the final round of Wimbledon qualifying in 2014.

“It’s a pretty clean slate. We haven’t played each other in a very long time, haven’t hit much together, (except for) the occasional practice here and there,” Barty said.

“I think Tyz (coach Craig Tyzzer) and I will put our heads together and try and come up with a game plan, and then on the day it’s about coming out and trying to execute it the best that I can.”

This is Kontaveit’s first semifinal of the year, a result that will propel her inside the world’s top 15.

During the Miami Open fortnight she has beaten a succession of talented players, starting with Amanda Anisimova and followed by Australia’s Ajla Tomljanovic, Indian Wells champion Bianca Andreescu – albeit via an injury retirement – and then giant-killer Hsieh Su-Wei, who beat Naomi Osaka and Caroline Wozniacki to reach the quarterfinals.

“She’s having a hell of a week … she’s playing some great tennis,” Barty said of the world No.19.

Barty, meanwhile, advanced to her second semifinal of the year after beating Petra Kvitova for the first time in five attempts, ensuring she will crack the top 10 next week.

The winner of the Barty-Kontaveit semifinal will meet either No.2 seed Simona Halep or fifth seed Karolina Pliskova, who face off the other semifinal.