Kyrgios races into round four at Miami Open

Nick Kyrgios conceded just four games and required less than an hour to beat Dusan Lajovic and take his place in the last 16 at the Miami Open. 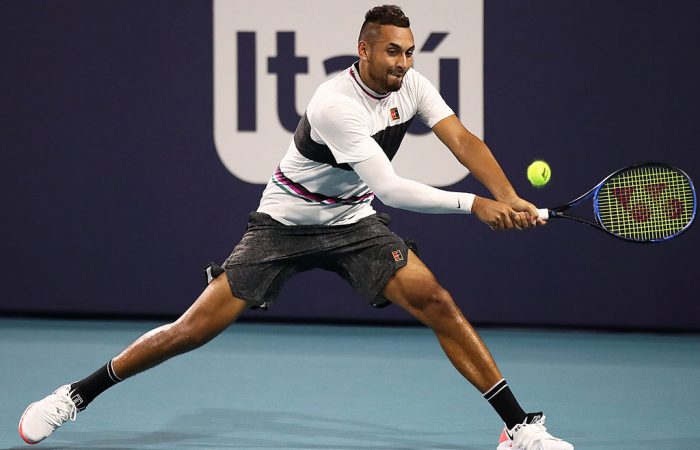 Nick Kyrgios thumped Dusan Lajovic 6-3 6-1 in a powerhouse performance to progress to the Miami Open round of 16.

The Australian world No.27 was too strong for his Serbian opponent, slamming 12 aces and winning 81 per cent of first-serve points.

2016 and 2017 @MiamiOpen semi-finalist @NickKyrgios moves into the 4th round for the fourth straight year with a 63 61 win over Dusan Lajovic. Kyrgios extends his undefeated #MiamiOpen win-loss record against players ranked outside the Top 10 to 12-0.

“Borna is an unbelievable competitor and one of the best players in the world. He knows how to win matches and is an unbelievable athlete. He moves incredibly well and I know he won’t give me a single point,” Kyrgios told atptour.com.

“I’m not going to think about it right now though. I have a day off tomorrow.”

Fellow Australian Jordan Thompson will aim to join him in the fourth round when he takes on Grigor Dimitrov, while Ash Barty – already into the fourth round of the women’s event – faces Kiki Bertens for a place in the quarters.

Both of those matches will take place on Monday local time.

He was even more ruthless in the second set, racing through it in under half an hour to complete victory.

“I don’t know what tomorrow is going to bring on the tennis court, but I’m going out there and having fun,” Kyrgios said. “I served well and returned well and I’m really happy. Today it was a pretty good all-around performance.”

In his four visits to Miami, Kyrgios has never fallen before the fourth round; in 2016 and 2017 he progressed to the semifinals.