Ash Barty wins an all-Aussie battle while Jordan Thompson earns another impressive victory at the Miami Open on Saturday. 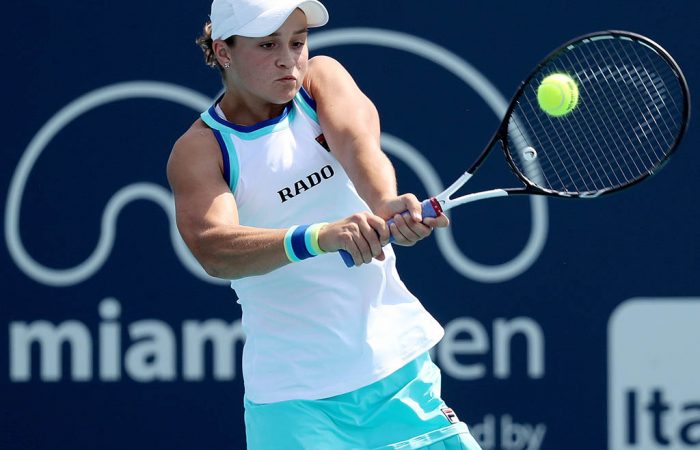 Ash Barty saw off fellow Aussie Sam Stosur in under an hour at the Miami Open on Saturday, while Jordan Thompson earned a big win over Russian 10th seed Karen Khachanov.

Barty powered into the fourth round with a 6-0 6-3 win, dropping just one of the first 11 games before a late rally from Stosur.

Next up for Barty, the world No.11, is a last-16 meeting with seventh seed Kiki Bertens.

“When I play against Sam, it’s all about trying to work my way into her service games,” said Barty.

“I was able to do that early and she gave me a couple of cheapies and I got on a bit of a roll. It was disappointing to not be able to close it out cleanly, but I got there in the end.

“I think any win that you can get where you feel confident and in control on the court is a positive thing. I felt like I was very much in control of my game today. A few things went my way early, and that’s sometimes all it takes.”

In the men’s draw, Thompson impressed again at the Masters level with an emphatic 6-2 6-3 win over Khachanov.

The Aussie, ranked No.77, will next face Bulgarian Grigor Dimitrov.

Nick Kyrgios, who plays Dusan Lajovic in round three on Sunday, went out of the doubles with American Taylor Fritz, losing 7-6(4) 6-7(3) 10-8 to Guido Pella and Joao Souosa.