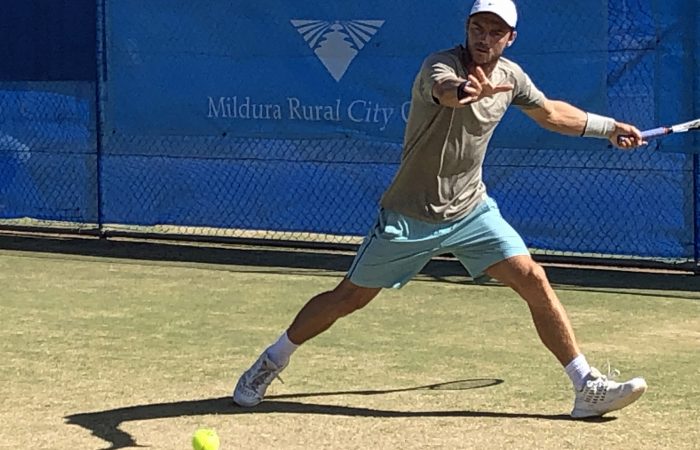 The 2016-17 champion only conceded eight points in the first set against Indian Arjun Kadhe. It didn’t get any better for the third seed who was then forced to retire midway through the second set with an injury to his hip flexor.

“It’s nice to get the win, obviously sad to finish the way it did with Arjun getting injured. Hopefully, he can take care of it and get back on the court in no time,” Kelly. 28, said.

The Victorian said it always felt good to return to Mildura. “I’ve always felt pretty comfortable ion the grass here, I’ve been coming since I was maybe 13-years-old – for the nationals back in the day. It’s great to have that ‘home’ sort of feeling.

“I’m playing some good tennis, it’s more the mental side that kind of fluctuates throughout the year for me, but things are going well at the moment and it’s just good to be enjoying my tennis again.”

Kelly will face Brit Brydan Klein in the final after the second seed came through his first centre court match of the week against Shuichi Sekiguchi of Japan. Klein dropped the first set in a tiebraker to the No.4 seed but used his greater experience to level in a one-sided second set. That was enough for the Brit to power away, winning the last six games of the match to post a 6-7(2) 6-1 6-1 victory.

With Klein claiming the Mildura title in 2008 and 2009 (he was also a finalist in 2012), the pair will face off on Sunday to determine who will become the first three-time champion.