Kyrgios: this could be the best I’ve competed in a long time

He may not have attained his highest level of tennis, yet Nick Kyrgios believes his competitive instinct was the main driver behind his stunning performance at the ATP tournament in Acapulco. 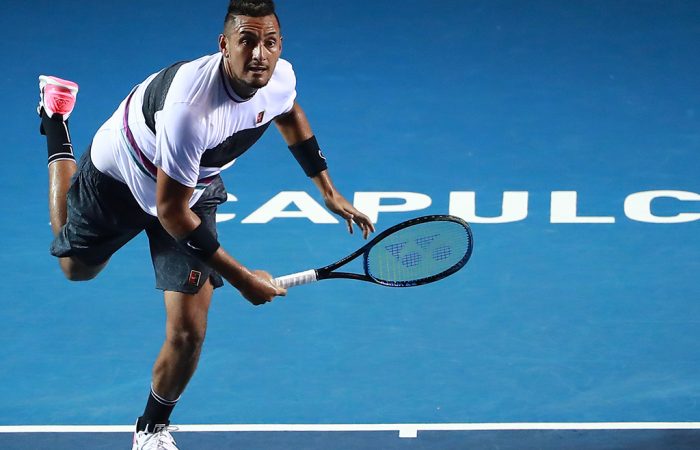 There were plenty of positives for Nick Kyrgios in a week that saw him win his fifth ATP title in Acapulco.

He beat three top 10 players – and a former top 10 player, too – in his final four matches at the 500-level event to be crowned a deserving champion.

His oft-injured body held up to the rigours of several long, draining matches, during which he demonstrated gritty fighting qualities.

"He beat three top-10 players, and Stan who is a Grand Slam champion. If you beat four players like that in a 500 event, you deserve to win it … I think definitely Nick this week you showed to be the best player, so well done to you."

What’s more, he identified room for improvement, which will come as good news to his large legion of fans both in Australia and across the globe.

“I think I’ve played a lot better (tennis before), but this could be the best I’ve competed in a long time,” he said following his 6-3 6-4 victory over Alexander Zverev in the final.

“I did everything I could on court, I tried 100%. I think I’ve played much better tennis. Today I served well in important situations.

“It’s huge. To win a tournament like this, beating the players I beat, just gives me confidence. I could have lost second round to Rafa in the second round – he had three match points. So I’m very lucky and very fortunate to be in this position.

“And shows if I can do it – and I was going through some really rough times, was really battling mentally, seeing a psychologist – I just hope I’ve set a good example to people that are struggling.

“If I can do it and go out and beat guys like Rafa, Stan, Zverev, you can get through whatever you’re getting through.”

Kyrgios spent more than nine hours on court across four consecutive evenings simply to reach the final, which he won in a comparatively brisk 90 minutes.

The win will boost his ranking more than 40 places to No.31, meaning he will be seeded for the ATP Masters event at Indian Wells, beginning later this week.

Kyrgios, a former world No.13 and two-time Grand Slam quarterfinalist, is trending in the right direction again after slipping to No.72 in the ATP rankings.

Yet in a candid, self-aware post-match press conference, he admitted that there is more work to do.

“Obviously the win feels good, but this is just the start. I think I need to do a lot better and I need to work a lot harder,” he said.

“I think my game is top 10, but the things I do off court, my professionalism, my work ethic, is not top 10. I think I need to get those things right, to get into the top 10. When you look at Sascha, Rafa, Novak, every single day they’re doing the right things. And for me I’m not doing the right things yet.

“So hopefully maybe I can start doing that, and one day I can be top 10.”

One player already there is world No.3 Zverev, whom Kyrgios identified as an inspiration.

“He’s an amazing person, amazing player, and I think he’s an unbelievable example for anyone who wants to play tennis,” Kyrgios said.

“He does all the right things, he’s extremely professional. I think I have a lot to learn from someone like him. He’s 21 and he’s achieved a lot more than I have.”

Yet with his latest title, and swathe of big-name victories, Kyrgios is on his way to building a similarly-impressive CV.

His next tournament, Indian Wells, begins on 7 March in California.