Nick Kyrgios will face Alexander Zverev in the ATP Acapulco final after beating John Isner is a thrilling third-set tiebreak. 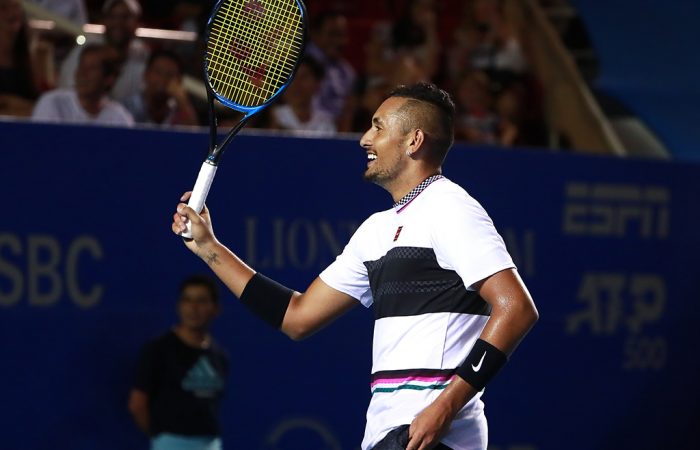 Kyrgios will face world No.3 Alexander Zverev in the final after the German’s 7-6(0) 6-3 victory over Britain’s Cameron Norrie.

Second-seeded Zverev has claimed 10 ATP Tour titles since his maiden win in 2016, winning five times in 2017 and four last year.

For the third straight night under lights in Acapulco, Kyrgios upset a big name in three thrilling sets.

Kyrgios’ victory in two hours and 21 minutes takes his collective court time in those three matches to just shy of eight hours.

"At one point they're cheering my name. The other point they're booing me. It's insane"@NickKyrgios can't get enough of this #AMT2019 crowd.@PrakashAmritraj pic.twitter.com/WILwYjmox4

“I thought we put on another great performance tonight,” Kyrgios told Tennis Channel.

“John’s an amazing friend of mine, so it’s tough playing him, because I like him so much (smiling). At times I feel bad when I’m in a point.

With the victory – his third straight over Isner – Kyrgios is projected to vault 30 places to world No.42.

He was dealt the tougher hand of serving second in all three sets, saving a break point in the second set with a wickedly curving ace down the T en route to a hold for 4-4.

Yet he came unstuck in the 12th and final game of that set, allowing Isner to break and serve first in the third set.

Neither player faced a break point throughout the final stanza, and when it progressed to another tiebreak, Kyrgios took the early initiative, scoring a mini-break and building a 4-2 lead.

He lost the next three points, but recovered to arrive at a first match point; he would miss his first two, but converted his third after a stunning point that saw both players scrambling about the court.

Having played with his knees taped all week in Acapulco, Kyrgios was pleased his body held up to the rigours of another three-set match.

“I put a lot of deep heat on it (my knees). Taping’s pretty limited (in effectiveness) out here with the amount of sweat. So I put my skins on to try and get some more support,” he explained.

“I knew today there wasn’t going to be much running. I was just trying to take care of my serve – it’s all you can really do against John.”