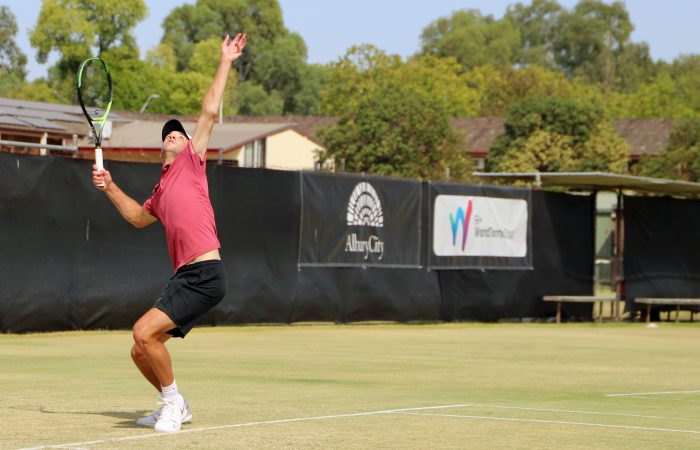 Victorian Matthew Romios has booked himself a semifinal berth at the Albury City Tennis International on Friday after his opponent, Queensland wildcard and fellow teen Alexander Crnokrak was forced to withdraw after a fall early in the second set.

“I was lucky today, even though it’s not the way you want to win, seeing a mate go down, but it happens,” Romios, 19, said. “I was feeling good out there. It’s been hot but I’m managing it, keeping my fluids up and looking after myself, so I’m giving myself the best chance I can.”

Romios defeated third seed Arjun Kadhe of India in the previous round, backing up some solid performances since a semifinal showing at the Australian Pro Tour event in Toowoomba last October.

“I’ve been playing some of best tennis lately and it’s starting to come through with the results I’m getting,” he said. “That good week in Toowoomba kind of got me going and I’ve kept the ball rolling a bit since then.”

Top-seeded Brit Brydan Klein had to work hard to overcome Tasmanian Harry Bourchier (No.5), eventually prevailing 7-6(8) 6-3 to claim his spot in the semifinal.

He will face Japan’s Shuichi Sekiguchi, the fourth seed coming back from a one-set deficit to secure a 5-7 6-1 6-4 win against Queenslander Thomas Fancutt (No.8).

NSW’s Chris O’Connell continued his good form on the Albury grass this week with a 6-4 6-3 win against Japan’s Rio Noguchi. He now plays Romios, guaranteeing an Australian in the final.

“It’ll be a tough one,” Romios said of the upcoming match. “I’ll give it my best and see what happens.

“It’s an opportunity to compare myself against a guy who has played at the higher level and work on things from there.”