The atmosphere, the opponent, the level of tennis, the manner in which he competed ... these were all highlights for Nick Kyrgios in a memorable win over Rafael Nadal in Acapulco. 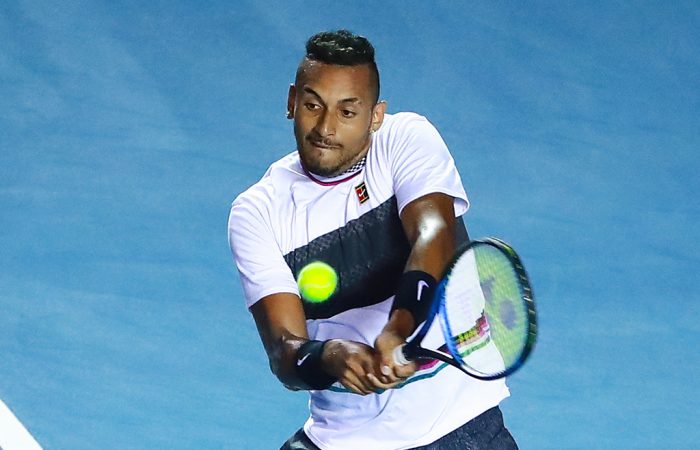 Nick Kyrgios says he has received an enormous boost to his confidence following an upset win over Rafael Nadal at the ATP event in Acapulco.

Kyrgios saved three match points to beat the No.1 seed in a final-set tiebreak in a match spanning more than three hours.

The result – which sees him level his head-to-head record against Nadal at 3-3 – sets up a quarterfinal meeting with Stan Wawrinka on Friday afternoon (AEDT).

“Massive,” he said when describing the victory in an interview with atptour.com.

“For me this year I’ve been struggling a lot. But to come to Acapulco again – one of my favourite tournaments of the year – and be able to put in a performance like that is pretty special.

“The level of tennis I played today was a good test for my body. Just the way I competed – I left it all out there and very fortunate to get the win, obviously he had a handful of match points.

“It was massive. Just a massive confidence boost for me.”

Kyrgios is now an incredible 6-4 against players ranked No.1 or No.2 in the world.

And he admitted it gave his intensity a lift when he faced the biggest stars of the game.

“Seeing Rafa in the draw – I saw it and I knew that I’m capable of beating these guys. It gives me a little more drive,” he said.

“I’ve been in some dark places, and ultimately I just want to give people (the belief that) if I can do it, a lot of people can do it. You don’t have to be anything special, just get out there and be able to compete and beat those guys. I hope I paved the way for a lot of guys.”

Kyrgios said he was suffering from the effect of food poisoning in the hours leading up to the match, and was also contending with knee problems; both his knees were taped throughout the encounter.

“The more I got into the match, the more I competed, the adrenaline kicked in, the crowd was amazing,” he said.

“It’s one of the best atmospheres I’ve ever played in and been involved with … That’s why we play. Coming to Acapulco, centre court, packed crowd, the vibe – they were never silent. They were cheering Rafa’s name, cheering my name. (The atmosphere) equals Miami when I played Federer that year (in 2017).

“I’m just really proud of the way I overcame a couple of things today, and the way I competed.

“I just want to do my thing – I’m trying to find my way. I’ve been through some tough stuff the last year or two so just to be able to go out there and compete and just have fun again is something that’s been lost for me for a long, long time. And to find it again today against a player like Rafa is pretty special.