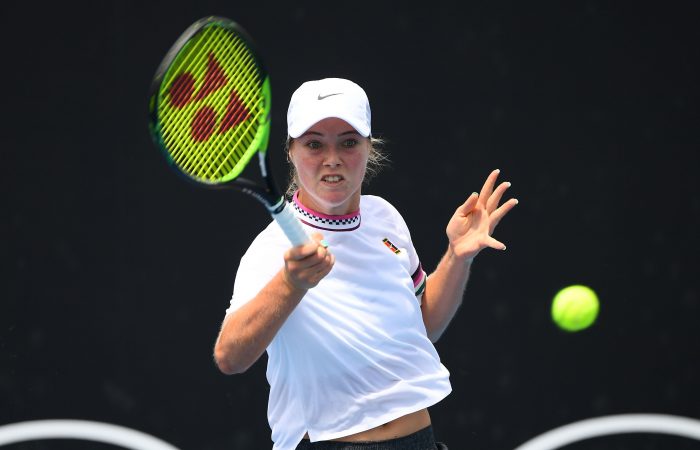 In perfect conditions at the Perth State Tennis Centre on Friday, Gadecki followed up her previous successes – which included ousting top seed Irina Ramialison of France – with a 6-2 6-4 win over fellow 16-year-old, Canberra’s Annerly Poulos.

The more highly credentialed Poulos – also competing in her first quarterfinal at this level – had enjoyed a similarly strong week but, despite a number of opportunities, found the going too tough against Gadecki, succumbing in 75 minutes.

“I told myself today that I had to keep it simple and stay mentally tough,” Gadecki said. “I was able to do that and that’s what got me through.”

“I came into this week just wanting some really good match play and being to show that I’ve got what it takes to beat some top players,” she added. “It’s a little bit unexpected but I don’t mind that because I feel like I can just go out there and play my game and just see where that takes me. It’s obviously been going really well so far.”

Gadecki will be joined in the Perth semifinals by Amber Marshall; the South Australian edging out Japan’s Haruna Arakawa in three close sets. After dropping the first set, Marshall found her way back against the third seed to convincing level the match. She lost momentum early in the decider, allowing Arakawa an early break, but then powered home to take the final six games, winning 4-6 6-2 6-3.

Meanwhile, Last week’s Australian Pro Tour titlist in Port Pirie, Lulu Sun, continued her relentless march, defeating Taylah Lawless of NSW in a neat 6-1 6-1 display. The Swiss fourth seed has only lost three games in total on her way to the last four. She will now face in Gadecki for a place in consecutive finals.

“It’s a good match-up for me and I’ve never played her before so I’m just really excited,” said of the upcoming match against Sun.

American No.2 seed Jennifer Elie was not disturbed by Anastasia Berezov, winning 6-4 6-1, with Marshall now waiting in the wings.