No pressure for Marshall in Port Pirie 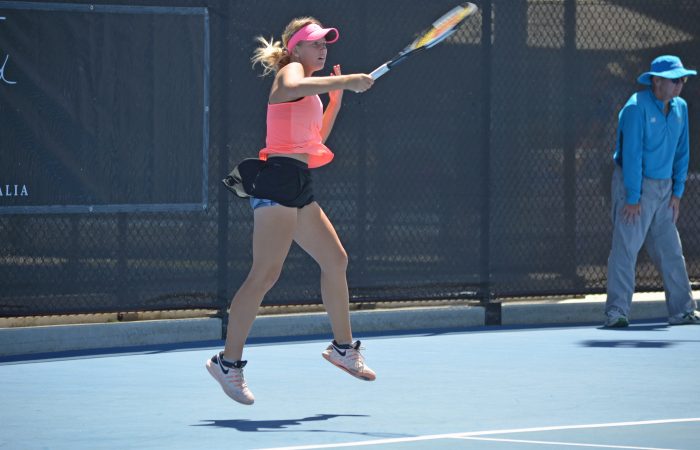 South Australian Amber Marshall is not placing any expectations on herself on the eve of her maiden ITF World Tennis Tour $15,000 event, the Port Pirie Come.See.Change Tennis International.

After a stellar week in which she won both singles and doubles at the City of Playford Gold AMT, the 17-year-old will face American Brittany Collens in the opening round.

“I’m feeling pretty good coming into this tournament,” she said. “I’ve got my family out here watching me and I’ve just got to go out and try and play the same as I would anywhere.”

After a four-tournament, 22-match winning streak in mid-2018, Marshall rose to prominence, entering the International Tennis Federation (ITF) junior top 100 where she now sits at junior world No.73. The ITF World Tennis Tour marks a step up, however.

“It’s my first time at this level, so there’s no pressure. There’s no points to defend. I just have to focus on playing my best. There’s nothing else to worry about.”

Top-seeded American Jennifer Elie is a familiar face on Australian soil, and she will play Aussie qualifier Yasmina El Sayed in the opening round on Tuesday, while second seed, Switzerland’s Lulu Sun – who defeated Marshall in the second round at the recent Australian Open Junior Championships – takes on another qualifier in South Australian 16-year-old Jasmine Adams.

With the qualifying rounds completed on Monday, yet another local teen, 14-year-old Charlotte Kempenaers-Pocz, also won through to the main draw. She will face wildcard Cyan Sun.