The Australian team is in a positive mood as they prepare to take on the USA in the Fed Cup World Group in North Carolina. 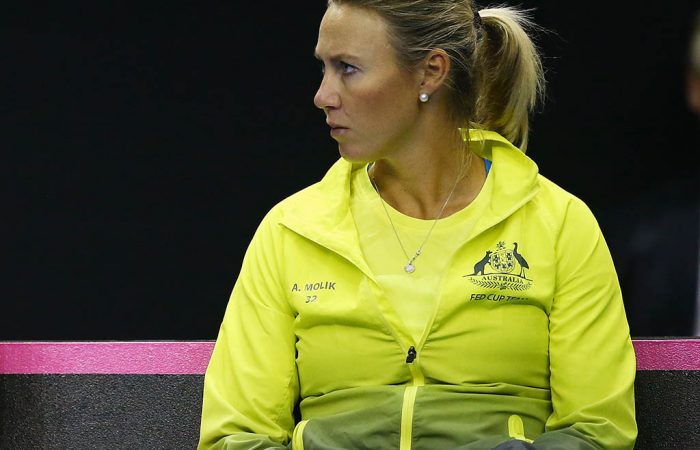 Australia head into this weekend’s Fed Cup World Group tie against the United States in confident mood, according to captain Alicia Molik.

They face a considerable task in Asheville, North Carolina, with world No.17 Madison Keys, Australian Open semifinalist Danielle Collins, world No.37 Sofia Kenin and doubles specialist Nicole Melichar lining up for the USA.

However, Molik believes the form of her players over the Australian summer leaves them well placed to face the challenge when the tie gets under way on Saturday.

“We are confident because we have a lot of players who’ve had a big bank of matches in the last few months,” she said.

“Confidence is something I don’t think you can buy, our players have earned it, they’ve been working really hard.”

Both teams have a youthful look, with Collins the oldest player on either side at just 25 years old.

“We have a lot of youth,” added Molik. “Ash and Dash are still very young players and beneath them we’ve got a really good group of three young women who are all contenders.

The Aussie Fed Cup team is gearing up for the World Group first round tie against 🇺🇸.

“I think experience always counts. It’s a matter of being prepared and making sure you always include big-match players.

“Knowing you don’t just have the talent but the personalities and the characters to perform in the clutch moments. That’s often what Fed Cup comes down to, those who can show their best on the big stage in a pressure situation.”

USA captain Kathy Rinaldi is without the two highest-ranked American women in Sloane Stephens and Serena Williams, as well as the experience of Venus Williams.

“Danielle might be the oldest, but she also went the collegiate path, so she’s fairly new to the tour. She’s really come out strong. She’s ranked 23 now,” said Rinaldi.

“And to have Sonya and Nicole and Madi step up – we’ve been so spoiled with Venus and Serena carrying the torch for so long, and doing so much for American tennis, for women, for tennis in general.

“So, a great opportunity for these young players to come up, and it’s a really exciting time in American tennis because we have so many young players coming up.”

It will be the 15th time the two nations have met in the Fed Cup, with the USA leading 9-5 having won the last meeting 4-0 in Brisbane three years ago, and Australia’s last win coming back in 1984.

@TennisAustralia takes the court before they take on #TeamUSATennis in the 1st round #FedCup tie this weekend. What do you think the final lineup will be? pic.twitter.com/kK0d5G7DZr

Molik is hopeful that her team will cope well with the transition from a summer of tennis in Australia to a partisan home crowd at the US Cellular Arena in Asheville.

“I feel like we always have a generous amount of support,” said Molik.

“They’ve had five or six weeks playing at home, playing in front of friends and family in their comfort zone so to speak, in their own conditions and the heat of our summer.

“It’s only fair that they come away and probably have a lot of the crowd against them. I think it brings out the competitive edge in everyone. It’s a good thing, it’s healthy.”