Thompson in fine form ahead of Davis Cup

At a career-high ranking and training well ahead of Australia's upcoming Davis Cup tie against Bosnia and Herzegovina, Jordan Thompson is ready for a call-up to the team if required. 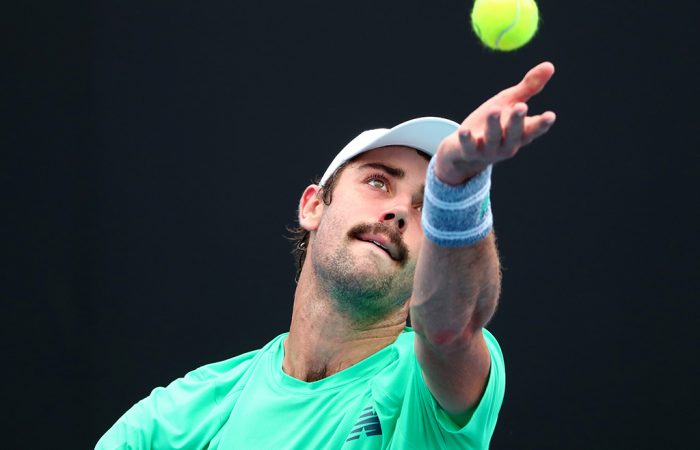 He doesn’t yet know if he’ll be selected to play, but Jordan Thompson is as ready as he will ever be should he be called up to play for Australia in its Davis Cup qualifying tie against Bosnia & Herzegovina, starting Friday.

Thompson practised at Memorial Drive in Adelaide on Wednesday, honing a game which has been winning him quite a few matches lately.

Up to a career-high ranking of No.61, the 24-year-old said that he would be ready to do whatever the team needed of him.

Today it’s @jordanthommmo2 hitting the practice court and chatting to the media in Adelaide ahead of Friday’s #DavisCup tie. #AUSBIH pic.twitter.com/mhqLu3d2p1

“It’s always competitive at Davis Cup weeks; everyone wants to put their hand up to play, and everyone pushes each other, so it’s been really great. Really great practice,” he said.

“Whatever they put me in, I’ll be ready, whether it be singles or doubles. Always proud to wear the green and gold. So yeah, it doesn’t worry me.

“(It’s determined by) who’s in form, off ranking, a whole lot of different things. Whatever the team thinks as well (regarding) match ups, it’s a range of different factors. We’ll probably decide that over the next day or two, so (I’ll) just be ready for what comes.”

This time last year, Thompson was outside the world’s top 100.

But an impressive 2018 season – highlighted by three ATP Challenger titles from eight finals appearances – catapulted him to No.72 by season’s end and laid the foundations for a strong Australian summer in 2019.

“(I’m feeling) a lot better than 12 months ago. Won a round in Brisbane, made the quarterfinals in Sydney, pretty good first-round win at the Australian Open and played a good match in the second round – came up against a good player. Won plenty of doubles matches; made two semifinals in Brisbane and Sydney,” he said.

“So I’ve got plenty of matches and feel a lot better about my game, and career-high ranking as well. So definitely pretty happy with my form.”

Thompson realised a dream when he was first selected for Australia’s Davis Cup team two years ago.

And despite the changes to the competition format – which are unpopular among the Australian team – Thompson said he still appreciated the opportunity to play on home soil in Adelaide.

“With this qualifying tie, it still brings the home-and-away aspect, so I’ll be incredibly proud to play in front of this crowd,” he said.

“Hopefully it’s a big crowd. Playing at home for your country, it’s so special. And any opportunity to do that, I’ll take it.

“We’ve got a great group, and we’re all pushing each other. The format may have changed, but we’re always proud to represent our country and we’ll do anything to do that.”