Woolcock breaks through in Burnie

After twelve months out with injury, Victorian Belinda Woolcock comes from qualifying to take the title in Tasmania, her first at a professional level. 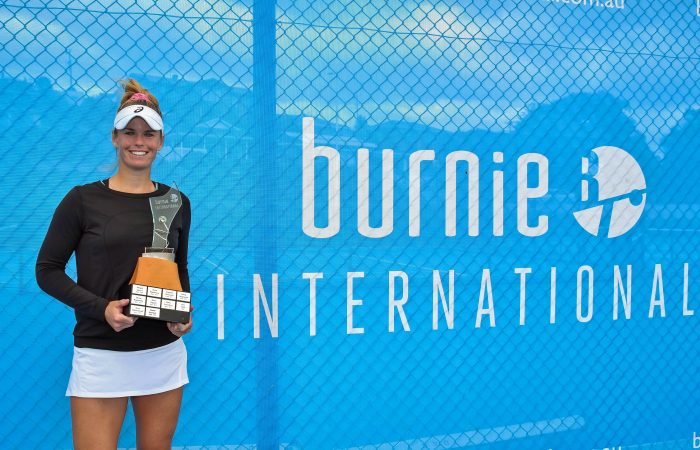 “It was a good feeling out there,” the 24-year-old Victorian said. “This is definitely the biggest highlight I’ve had in my career so far.”

Woolcock has showed tremendous courage in her first month back on tour after a horrific knee injury kept her side-lined all of last year.

“I feel overwhelmed but in a good way. It’s been a long twelve months but to be able to get to where I am today is just a really big positive. I’m very excited for what’s to come,” she said.

With the wind playing havoc, both players were forced to adjust their games with Badosa Gilbert resorting to serving underarm at times.

“Today was some of the toughest conditions I’ve ever had to play in,” Woolcock said. “I had to be really flexible and just do whatever I could with what was in my control, but I think I did that really well.

“I used the wind wisely. I just kept doing what I was doing all week, staying aggressive and sticking to my game plan. In tiebreakers you have to just focus on one point at a time and that’s been my motto for the whole week, making sure I go through my routine and not rush.”

A finalist on the ITF World Tennis Tour on just one previous occasion (a loss to fellow Australian Astra Sharma at a $15,000 event in Romania in 2017), Woolcock now has a $60,000 title under her belt, rocketing her to a new career-high inside the world’s top 400.

The Aussie success began in Burnie on Saturday when the women’s doubles final was won by third seeds Ellen Perez and Arina Rodionova who defeated Irina Khromacheva of Russia and Belgian Maryna Zanevska (No.2), 6-4 6-3.