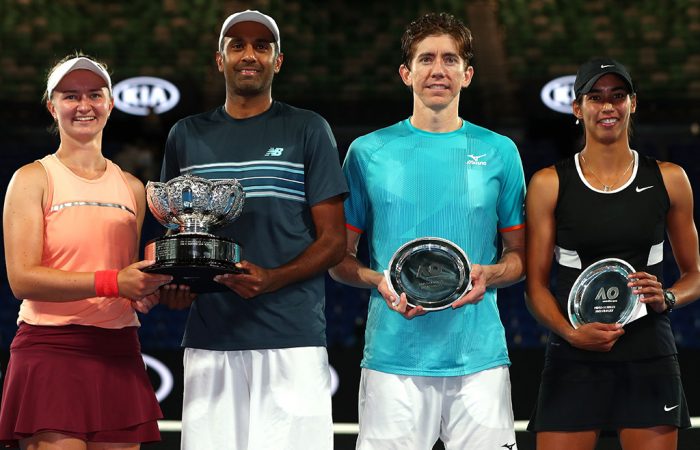 The wildcard entries have enjoyed a stellar fortnight at Melbourne Park but were outplayed in the decider on Saturday night, losing 7-6(3) 6-1 to third seeds Barbora Krejcikova and Rajeev Ram.

Sharma and Smith held a set point in the first set but were unable to stop the Czech-American pairing from running away with the match.

“It’s been a phenomenal week. Not only just going deep in the Slam … we had a great environment out there and a great challenge in front of us today,” Smith said.

“And we came up short, but the good news is, she’s got so many more years left on the tour and for me it’s just about getting more experience on these big stages, which I did this week.”

The pair were the first of four Aussie entries in double finals at the 2019 Open to lose.

On Thursday, Heath Davidson paired with Dylan Alcott to win the quad doubles; a day before Sam Stosur won the women’s doubles with China’s Zheng Shuai.

On Sunday afternoon John Peers has the chance to win his second Australian Open doubles when he teams with Finland’s Henri Kontinen against Frenchmen Pierre-Hugues Herbert and Nicolas Mahut.

Sharma and Smith were open to competing together again at upcoming Grand Slam tournaments.

“It’s just been an incredible experience and if I can get my ranking high enough I’d definitely love to play with JP again and get that partnership working again,” Sharma said.