Australia's John Peers and Henri Kontinen of Finland could not stop Frenchmen Pierre-Hugues Herbert and Nicolas Mahut from completing a career Grand Slam at the Australian Open. 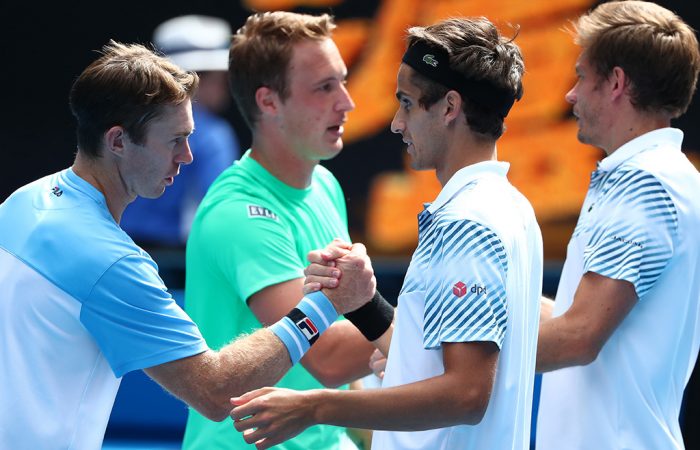 Playing on Sunday at Rod Laver Arena, the Frenchman were too strong for Peers and Kontinen, winning 6-4 7-6(1).

“We didn’t quite take the couple of chances we had,” Peers reflected.

“I felt from the word go that those guys were returning well and making a lot of balls. Our first couple of service games probably didn’t set the tone for us, but set the tone for them. We were in an uphill battle all day and we just didn’t quite get our noses in front when we did have a couple of chances to put the pressure back on them.

“But it was a tight match and showed we’re right back where we need to be.”

Herbert and Mahut’s victory helped them complete a career Grand Slam; they join an elite group of four pairs in the Open era who have achieved the feat.

Nicolas Mahut and Pierre-Hugues Herbert win the Australian Open to secure their career Grand Slam. They have won a big title every year since 2015:

There was only one break of serve in the match, with Kontinen broken to hand the French duo a 5-4 lead in the first set. Herbert then held to put them up a set.

The match went with serve in the second set but the French team dominated the tiebreak, establishing a mini-break off Peers’ serve for a 3-0 lead. They were never headed.

“You guys played a great match, you’ve had a great week and deserve it. Well done,” Peers said during the trophy presentation.

“We’ve had a tough end to last year but we’ve come back and started this year really well so hopefully we can keep it going the rest of the year.

“It’s great to play in front of quite a few people and get a good atmosphere out here. I’m looking forward to coming back year.”

Peers was gunning to become the first Australian since Mark Woodforde and Todd Woodbridge combined to together to claim multiple Australian Open men’s doubles titles.

Peers and Kontinen had won the Australian Open double in 2017.