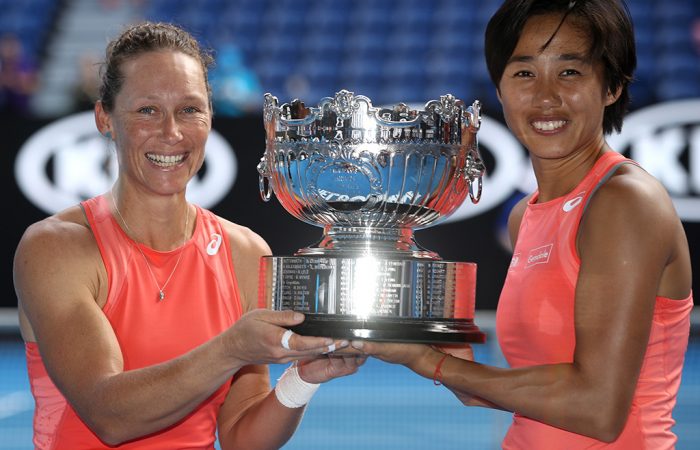 Sam Stosur is an Australian Open champion once more, teaming with Zhang Shuai to win the women’s doubles.

Stosur and Zhang were emphatic in their defeat of second seeds and reigning champions Timea Babos and Kristina Mladenovic, winning 6-3 6-4 in an hour and 36 minutes on Rod Laver Arena.

Stosur was ecstatic in triumph, 14 years after her mixed doubles success at Melbourne Park with Scott Draper.

The popular Queenslander dropped her racquet on championship point as if in disbelief before embracing her great friend at the net.

The victory was a redemption of sorts for the 34-year-old, who with partner Lisa Raymond held championship points to win the same title 13 years ago but failed to convert.

Stosur’s resolve was tested several times through the match; none more so than when she double faulted on her first championship point.

What followed was the point of the match – if not the tournament – a 25-point rally with both Stosur and Zhang unable to put away several smash opportunities before holding steady to win another championship point.

They wouldn’t be denied on the next opportunity, claiming their first Grand Slam title together.

“(I was) a little bit nervous,” Stosur admitted. “I actually have no idea where that first second serve landed because Shuai was in the way (laughter). This close or that close, I had no idea. I still felt confident because hadn’t lost my serve all day. I felt like when I was really needing to, I was coming up with the goods on serve.

“With Shuai at the net, I think we were making good decisions out there. Obviously it was a very close game. I felt confident in both of us to be able to pull it out then.”

Crucial to their triumph was a three-from-three break point conversion while Babos and Mladenovic claimed just one of their 11 opportunities.

Stosur was the only player not to be broken during the final but, equally, Zhang’s net play was critical.

The Chinese 30-year-old battled terrifically against the pair of power-hitters.

“(This was an) amazing tournament for me,” she said. “Today a dream (is) coming true for me.”

Added Stosur: “We spend a lot of time together practicing every week, wherever we’re at the same tournament. I think the friendship, the respect we have for each other is why we can then play so well together.

“It’s just enjoyable. We have fun. We’re smiling before every match. We say, ‘All right, let’s have some fun, give it our best shot’. We know it’s always the way we’re going to play our best.

“I know she believes in me as I believe in her. We do it as a team. To now be holding a trophy, and for Shuai, her first Grand Slam, it’s really exciting. I’m really happy that I can be the partner she has to be able to do that.”

The title is Stosur’s seventh major; she has won either women’s or mixed championships at each of the four Grand Slams in addition to the 2011 US Open singles crown.

Stosur and Zhang did it the hard way, knocking out the top seeds in the quarterfinals before a semifinal clash that went more than two and a half hours.

Such a pleasure to have Sam Stosur and Shuai Zhang join us after their win. 🏆 #AusOpen #9WWOS pic.twitter.com/U6hD9Z4s7A

Babos and Mladenovic, last year’s winners at Melbourne Park, knocked Stosur and Zhang out of the US Open last year in the semifinals.

“Congrats guys, you got your revenge,” Babos said, good-naturedly.

Since then, Stosur and Zhang have gone undefeated in 10 matches.