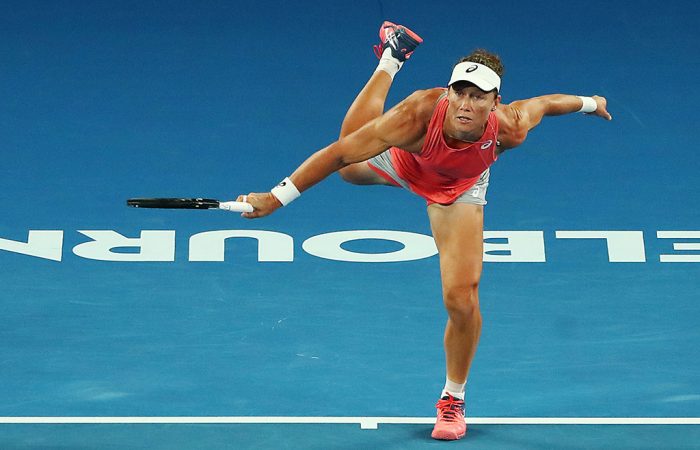 The Aussie-Chinese pairing beat Czechs Barbora Strycova and Marketa Vondrousova in three thrilling sets to take their place in their first Grand Slam final as a team.

They take a nine-match winning streak into the final against No.2 seeds Timea Babos and Kristina Mladenovic, who beat them in last year’s US Open semifinals.

Stosur’s sole title at the Australian Open came in the 2005 mixed doubles tournament with Scott Draper.

She reached the women’s doubles final in 2006 with Lisa Raymond, but the duo eventually lost to China’s Yan Zi and Zheng Jie after holding match points.

Stosur reflected on that match, and this fortnight’s run, ahead of one of the biggest doubles matches – and her 13th Grand Slam final – of a glittering 20-year pro career.

On her partnership with Zhang:

“We’ve been playing very well all week. The end of last year we picked up a title, made semis of US Open. So we’ve been playing well for a long time and I think we’re combining great as a partnership. We’ve got full belief in each other and trust on the court. We always back each other and stay positive. To be out there playing like that is just amazing and if we can end up winning a Grand Slam then that would be I guess another dream come true, really.

“It’s just been fun. Shuai and I have played on and off for a number of years now, and we always enjoyed playing together and then I think something really clicked at the US Open. This year we were like, let’s do this, let’s do it properly. When we’re gonna play (doubles), we’ll do it together, and that was kind of the plan. So it’s nice to be able to continue that form from New York.

“Probably in New York as well we practiced together for doubles, which we’d never done before, really. Spent a bit more time on court for that specifically. Worked out a bit of strategy and had a bit more of a plan going into (matches) than ever before. Even so without that, when you play more with someone regularly you start to get to know, even without talking about it, the ball goes here, I know she’s gonna take that, or that’s gonna be mine, because you’ve been in that situation so many times.”

“It’ll be a good chance to try and get one back on them (after the US Open loss). They’re one of the best teams in the world. They’ve played together a very long time. They’re very organised with what they’re doing. They’re probably more power players than some of the last couple of teams we’ve played. But they combine well as well.”

“Thirteen years after I’ve been in the women’s doubles final here, that’s a long time – I would not have expected to necessarily do that.

“For sure (I’m proud of my longevity). I still remember that week when I won with Scott in the mixed here in 2005 and that was amazing. So to think that, one, I’m still playing, and two, going deep and enjoying it the way I am, is fantastic.

“I got a message from Lisa Raymond who was my partner back in 2006, and she said: OK now you get another chance to try and win it, so go for it and do it (smiling).

“What sticks out (from that 2006 final) is that we were a set and 5-2 or 5-3 and 40-15, and lost (laughter). The two girls that we played were from China and that was the first Grand Slam title a Chinese player had ever won. So I feel like I’ve contributed to Chinese tennis in a way, which is nice (smiling). I guess now, playing wiht Shuai, it’s good to have her on my side.

“That was a tough match and one that probably took a bit of time to get over. But 13 years later I’m over it and we’ll give it another shot (laughter).”

“When you’re playing and you’re in the moment you don’t really think about that stuff. But if you kind of sit back and reflect on that, it’s pretty incredible. And again, it’s something I wouldn’t have necessarily thought, when I started trying to play professional tennis, that that would be the case. I’ve had lots of great achievements – I’m very proud of the career I’ve had on every form of the game. To have another shot at trying to win one, that’s amazing.”

With her win tonight in the #AusOpen doubles SF, @bambamsam30 has now notched 13 Grand Slam final appearances – across all four majors, and over a 14-year span.

On how doubles helps her singles:

“It definitely helped the confidence. If you’re playing on the off day, it becomes your practice for your singles. And there’s no better practice than in those real situations, like serving out a set, and returning; you can’t replicate that in a practice, no matter where you are.

“It’s a more fun event for both of us, and I think sometimes that actually makes it easier to go out and play well (laughter). I think almost every player would say singles is a priority. If you could somehow get that doubles mentality out onto the singles court, we’d all be far better off. But it’s a lot easier said than done.”