Astra Sharma and John-Patrick Smith are into the Australian Open mixed doubles final after an impressive win over Nicole Melichar and Bruno Soares. 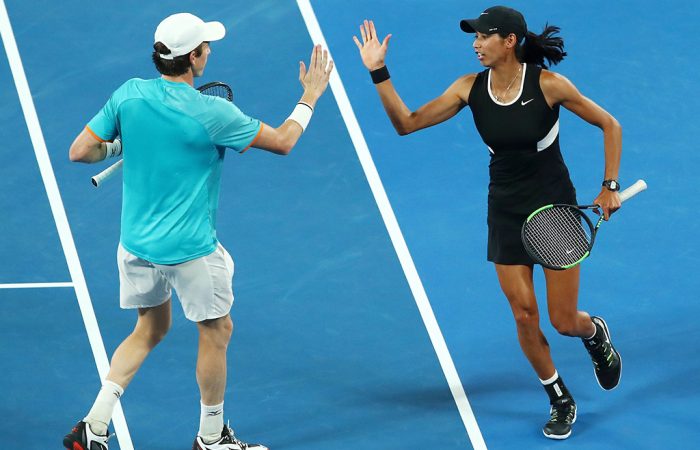 The duo join Sam Stosur and John Peers in flying the flag for the locals, with Stosur and Peers each reaching doubles finals of their own this weekend.

On Thursday night, Smith had even more reason to celebrate, triumphing on his 30th birthday.

After finishing the semifinal at 11:20pm, Smith was eager to spend the final minutes of the day in traditional fashion.

“Where are my beers? Who’s got my beers?” he asked the crowd in his on-court interview.

Sharma, a 23-year-old Western Australian, and Smith, a veteran from Townsville, had limited knowledge of each other before pairing together this fortnight.

They’ve clearly struck it off, defeating multiple-major winners Bethanie Mattek-Sands and Jamie Murray in the quarterfinal before Thursday night’s triumph.

“Just speechless really. Can’t really believe the situation we’re in. Just to keep beating such high-quality opponents, I mean, coming into this I had zero expectations and now I’m just absolutely over the moon,” Sharma said.

As Smith acknowledged, Sharma was the star, continuing her fine form in singles at Melbourne Park.

Sharma, the world No.232, qualified for her first major tournament and won her first-round match to ensure a huge rankings drop.

“Obviously it’s been so much fun, these two weeks here. Very thankful for the opportunity,” Smith said. “And playing with Astra – it’s her first Slam, so she’s doing fantastic. And I’m just glad I got the opportunity to play with her.

“I think Astra’s fearless out there; she goes for her shots, goes for her serve, not afraid to take over the net and it’s just pretty easy out there when someone plays with so much confidence.”

Sharma can toast a first taste of Grand Slam tennis with a final against Czech Barbora Krejcikova and American Rajeev Ram on Saturday, the country’s national day.

For Smith, advancing to a Grand Slam mixed doubles final marks a high-point in a pro career entering its eighth year.

“This is amazing. Not every day you get to play in the final of a Slam, especially in front of your home crowd and getting the win on my birthday today was awesome,” he said.

“Because I’ve always lost on my birthday (laughter).”