Getting to know: Alexei Popyrin

The 19-year-old Australian is through to the third round of a Grand Slam for the first time, and is proving to have a very level head on his shoulders. 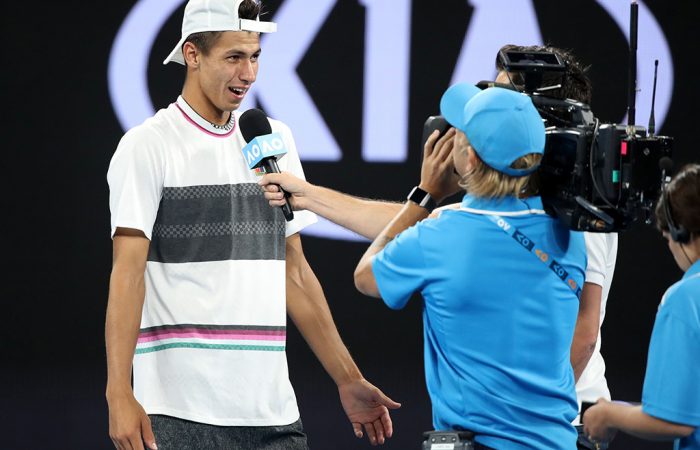 Alexei Popyrin, playing in the main draw of a Grand Slam for just the second time, is through to the third round at Australian Open 2019.

The Sydneysider has impressed onlookers with his weaponry as well as his presence in the spotlight, with Popyrin embracing the opportunity to play on big courts while keeping his approach to the game measured and methodical.

Here are some insights into the world No.149, who is set to rise to around 120th – or higher, if he keeps winning – in the world after his fortnight at Melbourne.

He loves playing in front of his home fans:

“I didn’t really feel much pressure, to be honest. I just wanted to go out there and enjoy the moment, just soak in the experience really. And the crowd was amazing, like always. The Aussie crowd are the best crowd. It was unreal (playing at Melbourne Arena against Thiem). I really enjoy playing on these big, big stadiums with massive crowds. So, yeah, it’s just a great experience really.”

He trains at the Mouratoglou Academy in France – and has hit with Serena Williams:

“I spent my first part of pre-season in Mouratoglou Tennis Academy with a lot of players. Stefanos (Tsitsipas) was there, Rudy Molleker was there. We had a great first part of the pre-season. Then mid-December we came to Australia. I was hitting with the Aussie boys.”

“Hitting with Serena) was a great experience. She’s a legend of the game. Just to hit with a legend, especially Serena, it really gave me a great, great experience. The balls were coming, really good, coming from her. Honestly, I expected that from her because she’s an unbelievable player. She gave me some tips after the hit. So it was great. (She told me) just stay focused, keep concentrated during this period.”

He keeps his focus narrow:

“(Lucas Pouille) is a great player. He’s a solid top-20 player, to be honest, with his level. I’m just going to go there, just play my game like usual, just keep concentrated.”

He takes a keen interest in the success of his compatriots:

“Alex (De Minaur) had an unbelievable week last week (in Sydney), is just carrying it on this week. Yeah, it’s great to have two players the same age, who grew up together, playing one of the best tennis. Seeing Bolty doing so well (too), it’s just great.”