Nadal too strong for De Minaur at Australian Open

No.2 seed Rafael Nadal dropped just seven games against Alex De Minaur in the third round of the Australian Open - but the match was far more competitive than the scoreboard suggested. 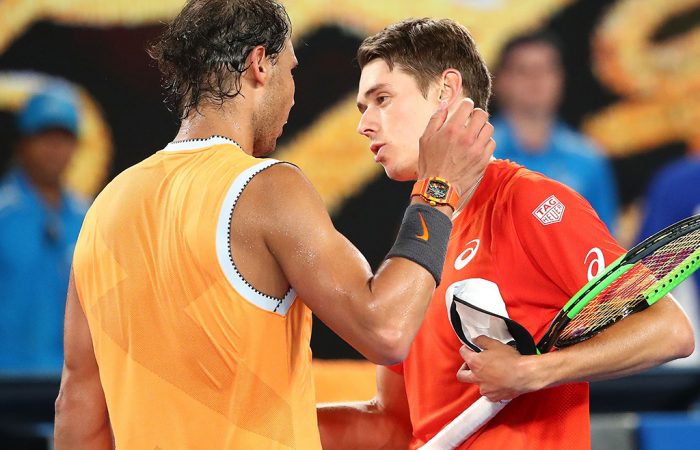 But it wasn’t all one-way traffic, with De Minaur lifting in the third set and saving five match points before Nadal finally sealed victory – and not before two hours and 22 minutes of toiling on court.

“I got better as the match went on,” De Minaur said.

“I’ve had a great Aussie summer. I’m really proud of the effort I put in. I played some great tennis.

“Obviously I’m a little bit disappointed that I wasn’t able to perform a little bit better. But, you know, that’s just what Rafa does to you. I mean, you’ve got to go out there and pretty much redline.

“I felt like I wasn’t able to do that today. But I still got better as the match went on. I fought till the end.”

The Rod Laver Arena clash was a carbon copy of the pair’s only previous meeting in the third round of Wimbledon last year, when Nadal rolled De Minaur for the exactly the same scoreline.

Declaring the youngster as the fastest player on the tour, Nadal predicted a big future for De Minaur.

“He is a big fighter and he is super quick,” Nadal said on court. “I think I played a very solid match and I want to congratulate Alex for a great start to the season – I think he has an amazing future.”

In the coolest evening of the opening week at Melbourne Park, the slightly built De Minaur struggled with the heavy conditions.

Nadal came into the tournament under an injury cloud following ankle surgery late last year and hadn’t played since the US Open but the 32-year-old looked fit and strong.

The Spanish bull belted 37 winners to the young Sydneysider’s total of 21, and his service game also gave the world No.29 plenty of headaches; De Minaur only won 19 per cent of points off the Spaniard’s first serve.

The Australian No.1 started brightly enough with the first three games taking over 20 minutes.

He had an early break point but Nadal quickly shut down that opportunity.

After wrapping up the first set in 40 minutes, Nadal shattered De Minaur’s hopes of a second set revival, breaking him in the first game.

He ticked off that set in 48 minutes to leave De Minaur sitting with his head covered by a towel as he tried to rally himself for the third.

While there were a couple of moments for the big crowd to get behind the local hope – saving his third match point in a 24-shot rally – it was mostly one-way traffic.

WHAT A RALLY! Demon fights back.