Stosur prepared to fight fire with fire at Australian Open

On the eve of her 17th Australian Open main draw appearance, Sam Stosur is wary of the challenge fast-rising star Dayana Yastremska poses in the opening round. 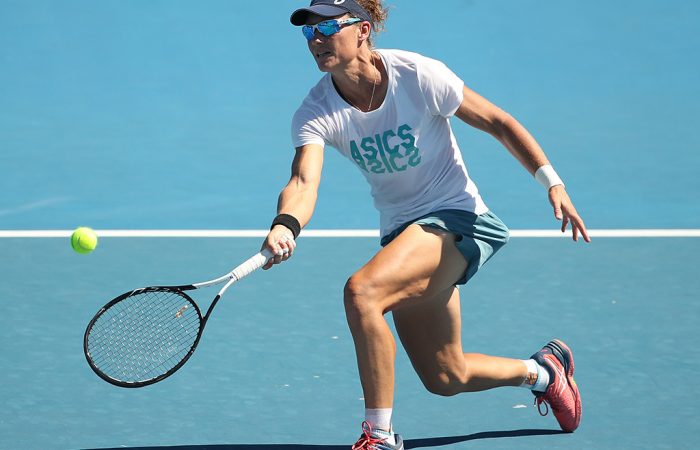 Fearless players must be treated with caution, Sam Stosur insists – and her Australian Open first-round opponent Dayana Yastremska is as fearless as they come.

“I think it’s going to be a tough one,” Stosur said of the 18-year-old Ukrainian, who surged to the cusp of the top 50 in her first full season since leaving the juniors in 2018, claiming her first WTA title in Hong Kong in the process.

“She’s got nothing to lose, and I’m going to have to play well, but I’m looking forward to that challenge. Playing the younger girls, it’s always a different challenge because they’ve got nothing to lose – they just swing and hit the ball hard. Everything’s ahead of them.”

Not that Stosur doesn’t back herself after playing plenty of tennis before heading to Melbourne Park.

The Australian No.4 arrives on the back of three lengthy three-setters at Brisbane and Sydney, clocking an impressive 3-6 6-3 6-4 victory over Dominika Cibulkova at Olympic Park before pushing Timea Bacsinszky to three sets.

“It’s been really good to get on court as much as I have,” Stosur continued. “You want to win as much as you can, but they’ve been tough matches.

“Brisbane was pretty good, and then in Sydney I stepped it up to another level, especially against Domi. (In the second round) I didn’t quite execute enough, but I got a good couple of matches there, something you can learn from and come in feeling pretty good.

“I thought I served really well, and probably got rewarded for it more in Sydney – whether that was better accuracy or choices or power, that was an improvement from Brisbane. I felt like overall I hit the ball a bit better.”

With 16 years between Stosur and Yastremska, experience is certainly on the 34-year-old’s side.

And as dangerous as the flat-hitting teenager may be, Stosur believes she has the nous to disarm her, even if she doesn’t have it all her own way.

“They’re the types of players that are sometimes hard to go up against,” she explained. “When you’re playing someone with no fear like that, it’s not necessarily the easiest thing. She’s certainly a player I think is going to be good in years to come.

“You might not get a say at certain times in the match, so you’ve got to hang in at that moment, wait for an opportunity and take it. Or do you fight fire with fire, go at them straight away with the same mentality?

“It’s something to think about, and when you’re out there probably going to have to take those sorts of decisions as you go.”

Stosur was full of praise for another young player, Ash Barty, ahead of the Australian Open, having watched her countrywoman grow into her role as the leading light in Australian women’s tennis.

“Ash has certainly taken over the mantle which is great for her, great to see – she’s having a great start to the year having finished off last year really well,” Stosur said.

“It’s exciting to see what she’ll be capable of doing, not just now but in years to come.

“Obviously Dasha (Gavrilova)’s been around, and everyone knows her. More of the younger ones are getting closer to being main draw entries at the slams, top-100 hopefully.

“So exciting times ahead, I hope.”

With eyes drawn elsewhere, Stosur is looking forward to flying under the radar in the early days at Melbourne Park, where she’s also set to play doubles once more with Shuai Zhang.

“It’ll be really good to get back on court with her again,” Stosur said.

“As for the mixed, I’m not sure about that yet – might decide on that in a few days.”