Alex De Minaur completes the incredible feat of winning two matches in one day, seeing off Andreas Seppi to win his first career title at the Sydney International. 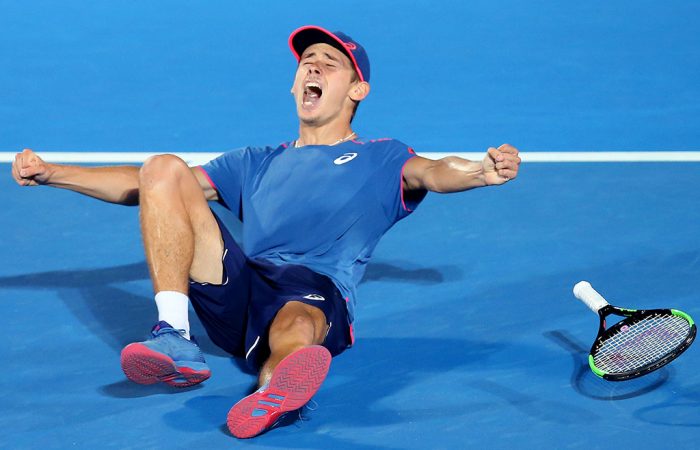 Forced to win his semifinal on Saturday afternoon against Gilles Simon after rain washed out play on Friday night, De Minaur returned to the court six hours later for a gutsy straight-sets win over the Italian veteran.

It was his first title in three ATP finals appearances – he fell in finals at Sydney and Washington DC in 2018 – and it was a feat he completed without dropping a set in five matches in Sydney this week.

Broken in the first game of the opening set and trailing 3-1, it proved to be one of the few blights on the 19-year-old’s game as he won six of the next eight games to take the first set against Seppi.

He broke straight back in the eighth game of the second set after dropping serve in the previous game and recovered from 4-2 down in the tiebreak to outlast his vastly more experienced opponent.

"You guys don't know how much it means to do it in front of all you guys, in front of my home."

In doing so, he became the youngest winner of the Sydney International since Lleyton Hewitt in 2001, and the first home-grown talent to claim the prize since Bernard Tomic in 2013.

It was also fitting he joined his mentor Hewitt as a 19-year-old winner.

“Oh, it’s surreal. I couldn’t think of a better place to get my first win,” De Minaur said.

“It’s been tough, because I have played a couple of finals and things haven’t gone my way. And to finally be able to take that step further and get my first win, it’s something that’s really special in front of friends and family and in the courts I grew up.

“That’s definitely memories that are going to last forever.”

The world No.29’s court coverage was immense as always, regularly chasing down his Italian opponent’s forehands and wearing the 34-year-old down over the two-hour, five-minute clash to make amends for last year’s Sydney final loss to Daniil Medvedev.

He also showed no sign of nerves, getting 73 per cent of his first serves and holding firm when three times the world No.37 had mini breaks in the tiebreaker.

The victory came after De Minaur’s 94-minute victory over Simon, where he never really looked challenged despite temperatures of more than 30 degrees.

“I knew coming in that if I wanted to come away with a trophy, I was going to have to play two really tough matches,” De Minaur said.

“I’m extremely proud of myself. I mean, this is why I have done all the hard work in the preseason. To come out and just be able to back it up, first match in the sun and then later on, it wasn’t easy. It was pretty tough conditions and long rallies

“I know I have put in the hard work, and it’s so good to see the results pay off.”

Meanwhile, Seppi was playing in his first tour final in three-and-a-half years. His last ATP title came in Moscow 2012.