Buoyed by strong results throughout the Australian summer, Priscilla Hon and Zoe Hives now turn their attention to the main draw of next week's Australian Open. 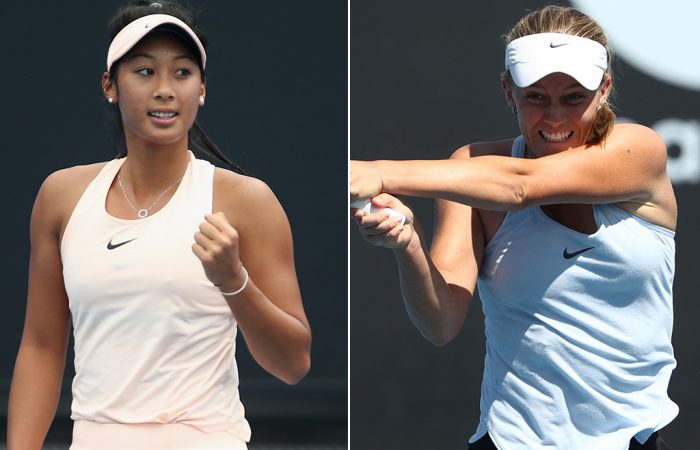 Rewarded with wildcards into their home Grand Slam after strong finishes to 2018, young Australians Priscilla Hon and Zoe Hives are content to let their more credentialled countrywomen take most of the limelight.

Just don’t take that as any indication they’re content to make up numbers.

While the top-100 quartet of Ash Barty, Daria Gavrilova, Ajla Tomljanovic and Sam Stosur lead Australia’s main-draw contingent, Hon and Hives bring impressive lead-up form into their Australian Open campaigns. And nothing could have boosted their confidence more.

Hon, Brisbane’s world No.161, has been here once before, having made her Australian Open debut three years ago. The 20-year-old opens against a qualifier and could meet 2017 Roland Garros champion Jelena Ostapenko in the second round.

Hon won through qualifying in Sydney this week and reached the second round where she took the opening set 6-0 against world No.33 Aliaksandra Sasnovich, before she fell in three.

“I feel like I have won a few matches and beat a couple of players, so I feel like my level is there, but I just need to work on my game overall.”

Despite coming up short in her bid for a maiden home-soil quarterfinal, Hon could see the upside heading to Melbourne.

“Now I feel like I’m pretty ready,” she said. “Obviously after Brisbane I was pretty down after my first-round loss. “It was close. I was just, like, ‘OK, you need to get some kind of matches before Australian Open’.

“So now that I’ve got that under my belt, it’s just trying to recover and get my body right.”

For Hives, Australian Open 2019 marks her Grand Slam main-draw debut, and after winning her first WTA main-draw match in Hobart this week against world No.75 Johanna Larsson, self-belief is high.

The 22-year-old was also coming off a qualifying win over former world No.12 Yanina Wickmayer in Brisbane last week and opens her campaign at Melbourne Park against American veteran Bethanie Mattek-Sands.

It’s quite the rise, having first started playing on a granite-sand court at her parents’ Kingston farm, in country Victoria.

“I’ve definitely got some confidence out of this week and it just reinforces the things I have to work on,” Hives said after bowing out to former world No.7 Belinda Bencic in Hobart.

While Hives may have downplayed her run, it was Bencic who saw plenty of upside to her beaten opponent’s game.

“She hits the ball really clean and her forehand and backhand are both good,” Bencic said. “I think she has a very bright future. She showed she has a lot of talent.”