Sydneysider Jordan Thompson begins his 2019 with a win at Ken Rosewall Arena after World No.41 Martin Klizan subdues Australian teen Alexei Popyrin in a third-set tiebreak. 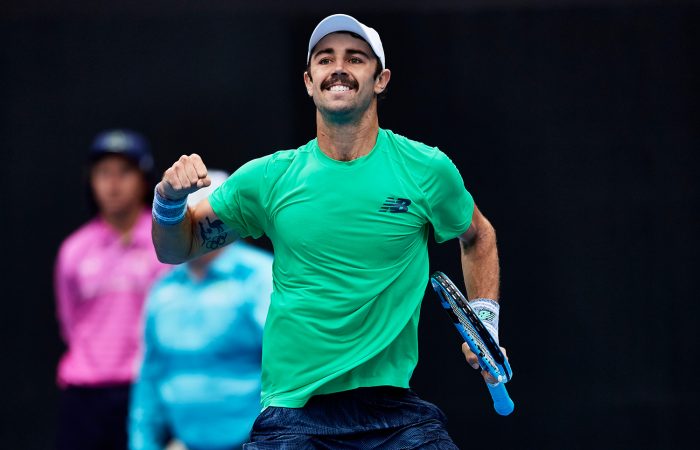 Sydneysider Jordan Thompson has enjoyed a winning start at his home tournament thanks to a straight-sets triumph over Adrian Mannarino on Sunday.

Thompson, a wildcard, brushed aside the Frenchman 6-3 6-3 to advance to a second-round meeting with defending champion Daniil Medvedev.

Earlier at Ken Rosewall Arena, world No.41 Martin Klizan survived a massive scare against another Aussie wildcard Alex Popyrin before eventually securing his progression into the second round.

Thompson, who earlier in the week reached the second round of the Brisbane International, revealed he was carrying plenty of confidence into the new season after winning 53 singles matches last year.

🔜 2R!@jordanthommmo2 is the first Aussie through to advance at #SydneyTennis, def. Adrian Mannarino 6-3 6-3.

“I played a lot of matches (last year); I think I won over 50 matches, so yeah, definitely not short on match fitness. Went into the pre-season and did some hard work. So it’s good that it’s paying off.”

The world No.72 broke serve in the sixth game of the first set and twice more in the second set to wrap up victory in one hour and 18 minutes.

Mannarino, ranked 30 places higher than Thompson, was a quarterfinalist at the Sydney International last year.

But it was Thompson who was in control throughout the contest. And he is looking forward to a crack at an in-form opponent like Medvedev, who will play in the Brisbane International final later tonight.

“Unbelievable (to be playing here). I used to train here as a kid. I was out here every day. Coming back here, I feel at home,” Thompson said.

“(Medvedev is) a great player, he’s won tour events before, he’s won this tournament, so I’m sure he’ll feel at home as well.

“It will be a really tough match but going into the Australian Open, tough matches is what you want.”

Meanwhile, Klizan led by a set and 3-0 before Popyrin – who had missed three set points in the 12th game of the first set – staged a remarkable comeback.

Popyrin belted more than twice the number of winners as his opponent (46-22) and won 25 of 34 trips to net, but unforced errors proved costly in the third-set tiebreak, quickly putting him behind 5-0.

Before an atmospheric crowd, he rallied, but Klizan’s experience shone through.

It was a thrilling finish, but Klizan proved too much for the young Aussie.#SydneyTennis #9WWOS pic.twitter.com/Nntuudrb9S

“Happy to be through first round,” said the 29-year-old, who had never before won a match in Sydney.

“Popyrin is a great player, and of course I’m sure that he’s gonna be a very good player. When you play in front of the home crowd, you always play much better. So I just wish him good luck.

“I’m happy for myself to be in the second round. It’s a decent first match in this year … I’m gonna have the day off. So see you in two days (smiling).”