Grigor Dimitrov remembers the almighty scare John Millman gave him in Brisbane a year ago - and the pair could be set for a second-round rematch in 2019. 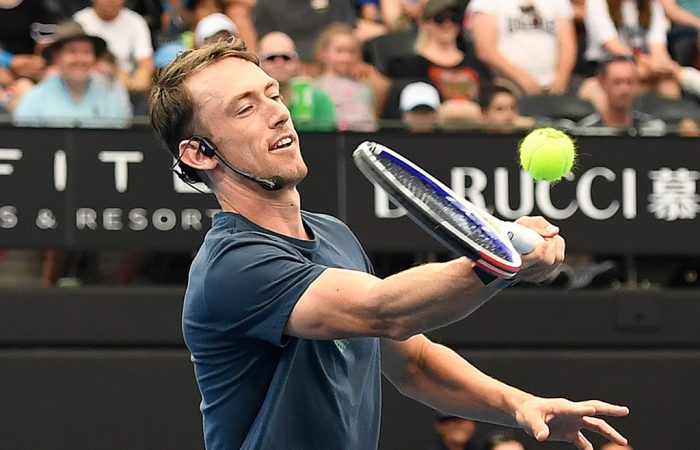 The draw has handed Grigor Dimitrov a potential quarterfinal with Japan’s Kei Nishikori but the former world No.3 sounded more wary of a re-match with Australia’s John Millman at the Brisbane International.

Dimitrov hopes to use the season-opening Brisbane event starting on Monday as a launch pad back into the world’s top five in 2019.

However, the Bulgarian hasn’t looked further than a potential second round clash with Roger Federer’s US Open conqueror Millman.

A then-unheralded Millman gave Dimitrov an almighty scare in Brisbane’s second round in January, holding two match points before the Bulgarian held on to claim a match that lasted more than two and half hours.

The crowd are on their feet as Grigor Dimitrov and John Millman shake hands.

The tennis world now knows Millman after his stunning fourth round upset over Swiss great Federer in New York.

Dimitrov didn’t need any introduction to Millman but expects to be reminded again of the world No.38’s class if they face off in front of a parochial Brisbane crowd this week.

“I mean, he played absolutely lights out, honestly. He had match points and had to come up with some unbelievable shots.

“It’s never easy to play on such a level for such a long time but he proved that he can do that throughout the whole match.”

Dimitrov expected an even better Millman in Brisbane after his breakout US Open quarterfinal success.

“I think with each year he has improved. I think his body is getting even better,” he said.

“And he’s playing at home now, so he should definitely use that to his advantage.”

Millman is one of seven Australians already in the Brisbane main draw ahead of final qualifying – a contingent headed by seventh seed Alex de Minaur and defending champion Nick Kyrgios.

Millman plays 2018 Australian Open quarter finalist Tennys Sandgren of the US in a first round match on New Years Eve.