US Open champion Sam Stosur says that although clay remains her preferred surface, she has worked to be a hard-court threat throughout Australia's summer of tennis. 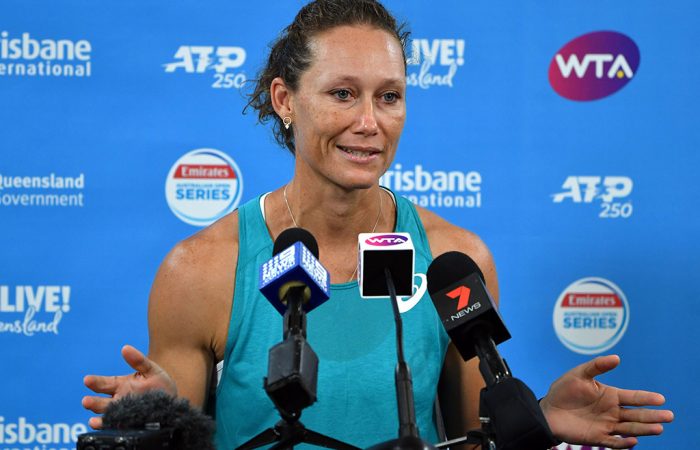 Clay may be her favourite surface but Australia’s Sam Stosur wants to remind rivals she is still a hard-court force this summer.

The 2011 US Open champion will kick-start her season at the Brisbane International when she takes on Czech qualifier Marie Bouzkova at Pat Rafter Arena on Monday night.

The former world No.4 says Roland Garros’ red dirt is her 2019 focus after the 2010 French finalist revitalised her game under new coach Nick Watkins in the off-season.

But Stosur, 34, is determined to show she is no spent force on hard court Down Under.

In fact, world No.74 Stosur claims results in Brisbane and at the Australian Open this summer will determine how long she continues working with Watkins.

“I love playing on clay, and that’s my favourite surface by far,” Stosur said.

“But I still think I can play well on hard court, too. And the women’s tour, probably 80 per cent of the year is on hard court, so if you don’t do well there, you’re going to struggle which is unfortunately kind of where I’ve been at the last year or so.

“Hopefully some of the things I’ve been trying to do (with Watkins) is going to help that success on a hard court.”

Stosur received a wildcard to contest the Brisbane International which boasts seven women in the world’s top 10; the tournament is headlined by top seed and defending champion Elina Svitolina of Ukraine.

Stosur has never made it past the second round in Brisbane in eight appearances.

But she hasn’t given up on becoming the first Australian woman to claim the Brisbane crown despite admitting there is little local advantage.

“If I won Brisbane, I’d be over the moon. But even though we’re from here, it doesn’t necessarily give you a huge leg up against your opponents,” she said.

“Everyone gets used to the heat pretty quickly. And having the roof almost kind of helps the Europeans, to be honest.

“But hopefully one day an Aussie will be holding the trophy.”

Stosur will headline a six-strong Australian women’s contingent that will feature qualifier Destanee Aiava and wildcards Kimberly Birrell and Priscilla Hon in action on Monday.

Daria Gavrilova and Ajla Tomljanovic are also in the draw.

US Open quarterfinalist John Millman will fly the Australian flag in the men’s draw’s opening night against American Tennys Sandgren.