Daria Gavrilova is hoping an improved mindset - helped my her recent engagement - will translate to improved results on court, starting at the Brisbane International in 2019. 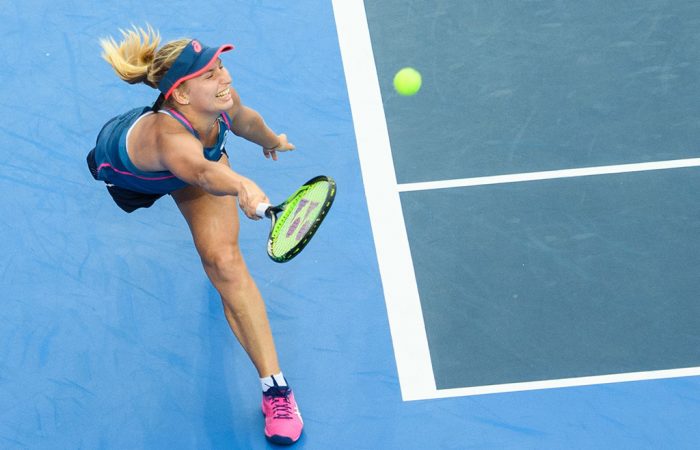 A recent engagement has ensured Australia’s Daria Gavrilova is already boasting some bling at the season-opening Brisbane International.

Now the revitalised world No.35 is eyeing off some Brisbane silverware after ditching a “super negative” mindset that sabotaged her 2018 season.

Gavrilova, 24, was showing off her engagement ring in Brisbane after fellow tennis player Luke Saville popped the question earlier this month.

Well, at least she was trying to show it off.

“I showed a few guys and they were like ‘nice watch’. I was like ‘no, what are you looking at?’ but that’s just boys,” she giggled.

Australian No.2 Gavrilova has been laughing more and more these days after admitting she had become her own worst enemy in 2018.

She beat three former Grand Slam champions this year but mostly beat herself up for inconsistent tennis after failing to back up a career-high No.20 ranking in 2017.

The turning point came when she cut a miserable figure on court in a loss to Serena Williams at the Cincinnati Masters in August.

“I was like ‘how are you not enjoying playing Serena?’ It was just wrong,” she said.

“It was probably the toughest season I have had. I was in the wrong head space. I was thinking ‘I am not improving, I am getting older’. I thought I was hitting the ball well but I couldn’t show it on the court.”

Gavrilova said she had two options – change her mindset or take a break from the game.

She opted for the former and is now daring to dream of becoming the first Australian to claim the Brisbane title.

“It would be pretty cool. I was surprised (no Australian woman had won Brisbane),” she said.

Her new positive outlook will be tested in the Brisbane first round where she faces eighth-seeded Latvian Anastasija Sevastova.