Nick Kyrgios has tipped his cap to new Australian men's No.1 Alex Minaur, saying the teenager has arrived on the "big stage". 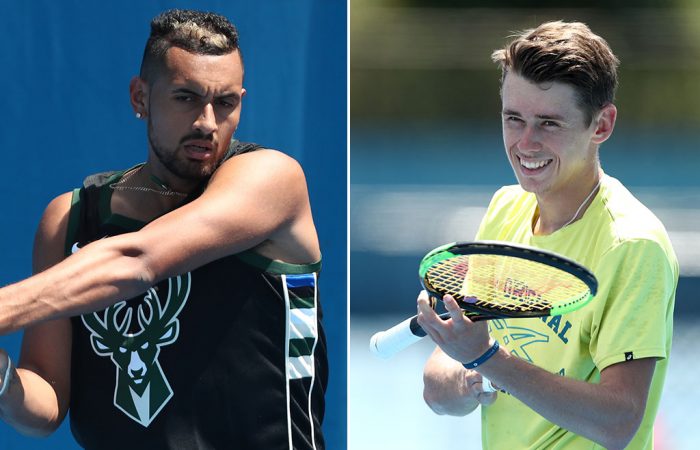 Nick Kyrgios has offered gushing praise for Alex De Minaur, despite the teenager’s stunning rise robbing him of Australian No.1 status.

Kyrgios marvelled at De Minaur’s breakout 2018 season that has taken him to the top national men’s ranking with a bullet.

While Kyrgios endured a frustrating year, De Minaur has soared from world No.208 to 31 in 2018 to ensure he claimed the ATP Newcomer of the Year honour.

World No.35 Kyrgios saluted De Minaur before they feature in the season-opening Brisbane International which starts in earnest on Monday.

Kyrgios may be Brisbane’s defending champion and eighth seed but all eyes are on De Minaur after returning to the tournament which launched his stellar 2018 campaign.

Good to be back at @BrisbaneTennis can’t wait to get started 🙌🙌🙌 pic.twitter.com/wg9FtIIsIl

“It’s always great seeing other Aussies do well. I am not the jealous or envious type – if others have success I am happy for them,” Kyrgios said.

“Seeing what Alex has been doing, he is now on the big stage. I know he is excited about the Aussie summer and I am sure he will do very well.”

De Minaur made the 2018 Brisbane semifinals as an unheralded wildcard but he returns this week as the No.7 seed.

Kyrgios said he always knew the likes of De Minaur and John Millman – who famously beat Roger Federer in the 2018 US Open fourth round – would share the limelight with him.

“I don’t really feel the pressure was on me (to fly Aussie flag at majors),” he said.

“I knew we had a lot of good players, had a lot of depth. We just hadn’t broken through yet. Now we have a lot of guys there, it’s an exciting time for us.”