Berezov, Gadecki to clash in 16/u final

Top seeds Olivia Gadecki and Anastasia Berezov will clash in the 16/u Australian Championships girls' final while No.2 seec Tai Sach made it through to the boys' final. The 12/u finalists were also determined on Saturday. 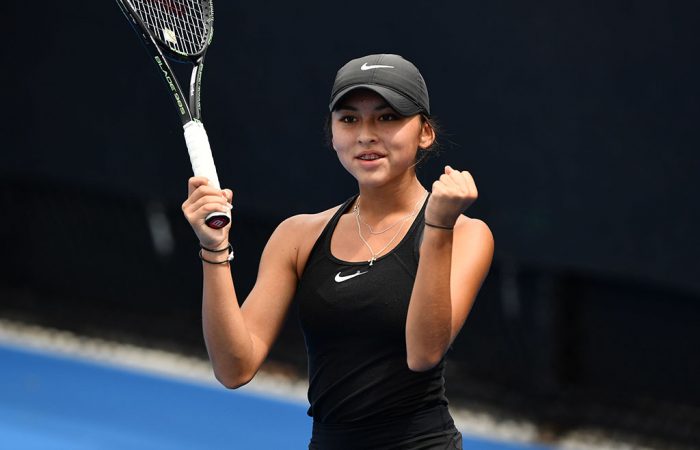 The December Showdown will conclude tomorrow with No.1 Olivia Gadecki (QLD) and second seed Anastasia Berezov going head-to-head in the 16/u Australian Championships girls’ final.

No.2 seed Tai Sach (QLD) was also among those securing his place in a championship final as the 12/u and 16/u event semifinals were completed on Saturday.

Sunday marks the end of the December Showdown, Australia’s biggest junior tennis event series that has been running since the the beginning of the month.

Enzo Aguiard (VIC) had a surprise win over fellow Victorian and third seed Cooper White in the 16/u boys draw. After losing the first set Aguiard settled into the match, winning the second and third.

In the final Aguiard will meet Sach, who survived a tough match against No.4 seed Kamil Kozlowski by eventually winning 7-6(5) 7-6(5).

“We both played well, his biggest strength is his serve which is hard for me to break. We both were holding in the second set, which was a bit difficult for me, but I got through to the end,” Sach explained.

In the girls’ event, Gadecki won her semifinal 7-5 6-4. yet opponent Tina Smith rarely gave in.

“She’s a really tough player, makes a lot of balls, you’ve got to really earn your points,” Gadecki said. “I thought I competed well and just trusted the process, I think that is what got me through at the end of the day.”

“First set was pretty tight, we both played well. I mean, at the end it could have gone either way in the first set but I held it together, stayed composed and I just kept fighting until the end,” Berezov told tennis.com.au.

No.1 seed in the 12/u boys’ draw, Mudiwa Munyimani (VIC), was upset on Saturday morning, falling 6-1 6-1 to fourth seed Yuta Tomida of Japan.

He has been in excellent form this year, winning the 12/u Australian claycourt title at Lyneham in October.

There was an upset in the girls’ 12/u matches with Japan’s Mayu Crossley ending top seed Sarah Rokusek’s journey by a scoreline of 6-2 6-0.

It will be an all Japanese final, with No.2 seed Ayuna Nakazato advancing through the second of the semifinals, beating Seri Nayuki 6-1 4-6 6-1.