Top seed Gabriella Da-Silva Fick beat Ivana Popovic in a third-set tiebreak to reach the last four of the 18/u Australian Championships, while top two seeds Alexander Crnokrak and Rinky Hijikata remain on track for a boys' final clash. 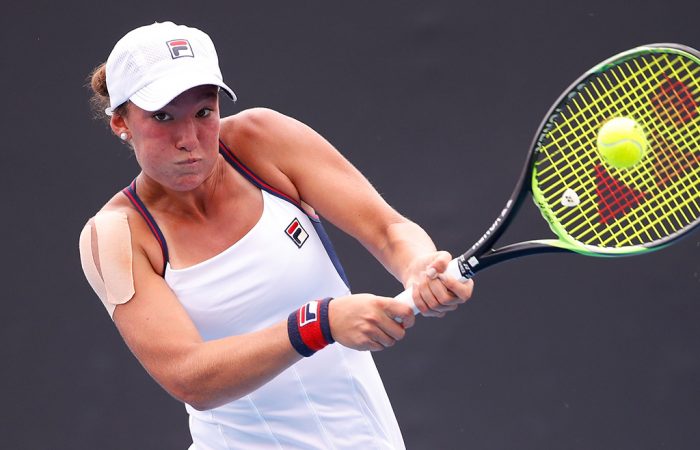 Gabriella Da Silva-Fick outlasted Ivana Popovic in a three-set thriller at Melbourne Park on Thursday to reach the semifinals of the 18/u Australian Championships.

The top seed led 5-2 in the third set before Popovic stormed back to force a final-set tiebreak. On match point, Da Silva-Fick’s shot struck the net cord and died on Popovic’s side, ending the match after nearly two-and-a-half hours.

“I stopped creating the points and I started to wait a little bit to see what she was gonna do and that’s why she got back into the match,” said Da Silva-Fick after the 6-3 2-6 7-6(4) win.

“Then I was like, I’m just gonna play my game here, gotta be tough, I gotta trust myself, I’ve gotta use all my strengths. And that kind of lifted me up and kept me going – I started to come into the net more and be more aggressive.

“I actually struggled this (whole) tournament … I lost my first (group) match and I really wasn’t playing great. It’s my first tournament back in a while, I finished school and that. So I’ve had to battle through all my matches.

“I’m just happy I could pull through that one and keep my level when it mattered.”

That match was the only one of the girls’ quarterfinals to extend three sets.

Progressing more smoothly were Annerly Poulos and Olivia Gadecki, who beat Olivia Symons and Amber Marshall respectively to set up a semifinal showdown.

Qualifier Taylah Lawless beat No.3 seed Bojana Marinkov 6-3 6-0 and will next face Da Silva-Fick for a place in the final.

In the boys’ tournament, defending champion Alexander Crnokrak took his winning streak to four with a dominant 6-1 6-2 win over eighth seed Chen Dong.

In his three group matches and his quarterfinal on Thursday, the Queenslander has dropped a collective total of just 14 games to progress to a semifinal meeting with sixth seed Ken Cavrak.

The other semifinal will pit No.2 seed Rinky Hijikata against third seed Dane Sweeny, who like Crnokrak are undefeated after four matches.