Sonton, Winter win through to 14/u quarterfinals

There was more steady progress for the top seeds in the 14/u Australian Championships at Melbourne Park while on Monday main-draw action got underway in the 18/u tournament. 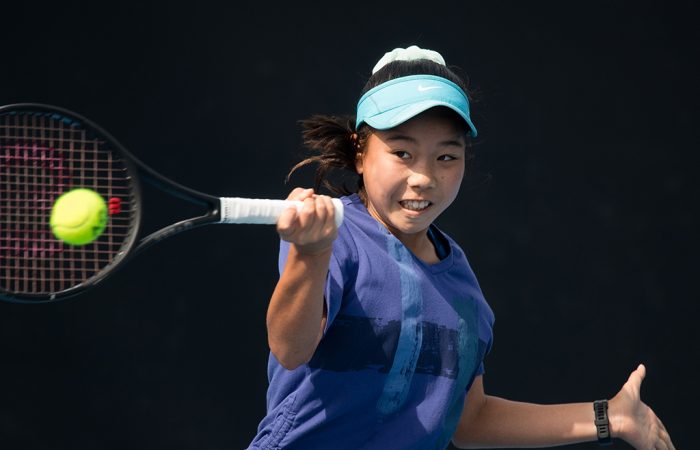 Girls’ second seed Hana Sonton survived a first-set scare to take her place in the quarterfinals of the 14/u Australian Championships at Melbourne Park.

Sonton eventually ran out a 7-5 6-1 winner over 15th seed Stefi Webb to set up a meeting in the last eight with qualifier Elena Micic.

“I wasn’t playing too well. First set was really up and down. Second set I think I just started playing better,” she said.

“I told myself to focus, I guess. When I’m playing well I just stick to the game style, and then if I’m not and it’s not working, I’ll just change it.”

Sonton won the 12/u Australian Championships at last year’s December Showdown and said that victory gave her some confidence.

Winter, meanwhile, will face Japan’s Shogo Sanada – last year’s 12/u champion – for a place in the semifinals.

“I feel like I played a pretty good game. Zachary was pretty good throughout the whole match, but I just kept consistent,” he said.

“There’s a little bit of pressure (being the No.1 seed), but I don’t really focus on that too much. It’s just a number.”

In other boys’ results, third seed Jett Leong cemented his place in the quarterfinals with a 6-1 6-1 win over Rohan Srivastava; Leong has dropped a combined total of just five games to reach the last eight.

The first round of group matches were played on Monday at the 18/u Australian championships.

No.2 seed Rinky Hijikata avoided the upset bug with a 6-4 6-2 win over Thomas Bosancic, while third seed Dane Sweeny – the 16/u champion at last year’s December Showdown – was a 6-7 6-3 6-0 winner over Sean Van Rensburg.

There were also victories for No.2 seed Ivana Popovic and Australian Junior Fed Cup representatives Annerly Poulos and Olivia Gadecki.