Alex De Minaur has capped a breakthrough season by taking out the award for the ATP's Newcomer of the Year, receiving the honour in a ceremony on court at the ATP Finals in London. 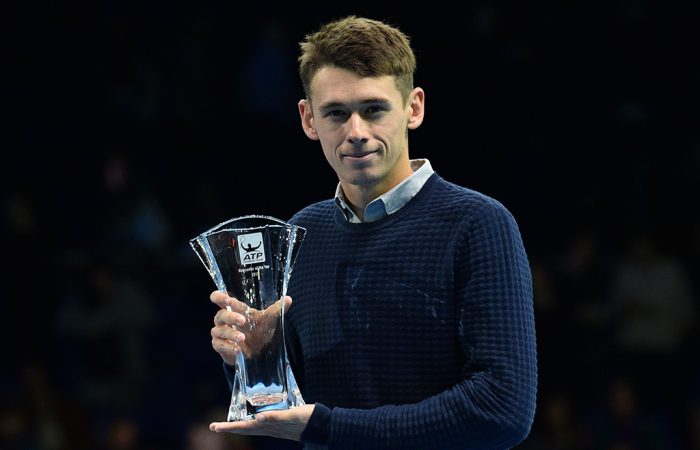 Alex de Minaur has won the ATP Newcomer of the Year award after his terrific breakout season in 2018.

The award is given to the player who entered the top 100 for the first time in 2018 and made the biggest impact on the ATP World Tour this year.

The 19-year-old was honoured on court at London’s 02 Arena as the ATP Finals got underway.

“This is incredible,” De Minaur said.

“Definitely gives you a lot of hunger to be able to try to make it here. This is definitely one of my goals and I’ll do everything in my power to one day hopefully get here.

“It’s been a sensational year. A year that I didn’t really think was going to happen, I could have only imagined. I’ve enjoyed every second of it and it’s probably the best way to finish the season, being able to receive this award.”

"And the world's gonna know your name" 🎵@alexdeminaur is presented with the ATP Newcomer of the Year award for 2018 ✨ pic.twitter.com/p6MsyYxvyh

Ranked world No.208 to start the year, De Minaur climbed 177 spots to finish at No.31 and become the top-ranked Australian man on tour as well as one of only two teenagers ranked inside the ATP’s top 100.

The Sydney native started his season reaching his first tour-level semifinal in Brisbane before immediately backing it up with a final at the Sydney International.

Well the season is over for me couldn’t finish with a win!!! But what a year it’s been, can’t wait for 2019💪🔥🔥 pic.twitter.com/9eoyB2PCIi

The young Australian competed admirably in Grand Slams, reaching the third round of Wimbledon and the US Open before losing to Rafael Nadal and Marin Cilic respectively.

In an interview with Sport360, De Minaur reflected on his incredible performances during the Australian summer.

“The Australian summer was just insane. The support I got was incredible. There’s nothing better than playing at home, with your home support. It’s probably the best way I could have started the year,” he said.

“From then on I’ve tried to take that momentum and that self-belief and take it the whole year.”

De Minaur also touched on what he means to be the top-ranked Australian man.

“It’s another thing I never expected. I played some serious tennis and I really owe it all to the other Aussie players. They’ve helped me grow and believe in myself and play some good tennis,” he said.

“I think Australian tennis at the moment is in a good spot. We’ve got four guys in the top-40 and we all want the best for each other and we keep pushing each other, we watch each other play, train with each other and it’s just a great environment.”

The speedy Aussie will now take a well-earned break, before starting his season at the Brisbane International in 2019.