After announcing her split from Josh Eagle, Sam Stosur sat down with tennis.com.au to discuss the search for a new coach, her pre-season approach and her goals for 2019. 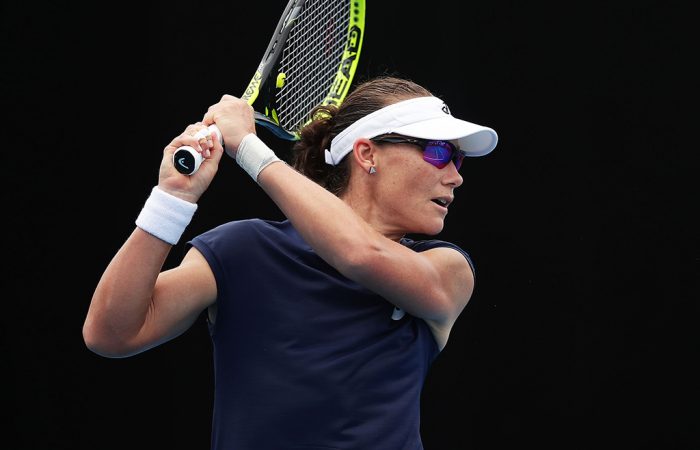 So the parting of ways with Josh – that seemed very amicable?

“Oh it’s fine. We didn’t have a fight or anything like that. There was actually no issue. But we spoke in Hong Kong and in the end Josh was like, I still think you can do something really good in tennis, but there’s something you can maybe be better at or maybe just hear it differently, or something, that might click (with someone else). I think we did pretty well considering – we worked for two years. It started out as ‘oh Josh can you come and help me through the US Open Series’ and turned into a two-year relationship. I enjoyed travelling with him and he gave me lots of insight and things to think about and helped me on and off the court. It was just (a matter of) maybe we’ve done all we can do.”

So what are you looking for in a new coach?

“I only want a coach if I really think we’re on the same page and they obviously really think they can help me (laughter). It’s a maybe slightly different scenario for me now, because I feel I’m really clear on what I need to do … I feel like given my experience and my age it can be more of a combined type thing; it doesn’t need to be going to the court and you stand there and you wait for the coach to tell you exactly what to do. I know through all the years of playing, OK, this is how I feel I’ve gotten to the point of playing my best. You don’t have to spend time working that out, necessarily. Also, given my age, you don’t have maybe that luxury of spending six months getting to know each other. I don’t want to spend that time getting to know someone and then be like, oh, actually, it wasn’t right. I don’t know how you necessarily get around that, but I want to make sure it’s right.”

If you can’t quickly find someone who’s the right fit, are you open to going solo?

“Yeah. I would. Matt (Coridas), my trainer, he’s fantastic. He’s my trainer but he’s actually very good tennis wise and can help come up with some ideas. We’ve talked a lot about actual tennis, not just ‘here’s your footwork, here’s your strength.’ And he was really involved with Josh and me so has a pretty good handle on things. He’s obviously my trainer – but I don’t feel like I’m alone. I’m not rocking up to practice with no-one there.”

So who are you practising with?

“He’s been here (in Melbourne) this week obviously (as I begin my pre-season). I actually hit with Sarah Tomic today, I’m hitting with Belinda Woolcock the next two days. Two weeks ago (ahead of my trip to Queensland later this week) I actually called my old childhood coach, Nick Watkins. We worked together ’til maybe I was 15. It’s been nearly 20 years since we’ve been on court but we always kept a really good relationship. He was like ‘yeah we can do that, but I wanna make sure whatever we do, I can actually help you, and know what we’re trying to work on’. We spent two hours on the phone and probably could have talked for another two hours – just about my game, what I think I need to do, improve, what I think I’m doing well, and then things he’s picked up over the years watching me. I’m actually really excited about it; slightly different perspective, but someone who’s known me a really long time. Nick really knows his tennis and has always taken an interest in me.”

What did you make of Ash Barty’s season, which she closed on a high in Zhuhai over the weekend?

“I saw the serve stats, and a lot of them she’s No.1, or No.2 at least. That’s impressive, that probably shows why she’s winning so many matches. I wouldn’t have necessarily said a couple of years ago that Ash, when hitting with her or playing a match with here, going ‘oh my god her serve is the best in the world’. But I hit with her in New York (in August), and I remember telling Josh at the end of practice: Ash’s serve is really hard to read at the moment. It’s not like she’s hitting at 200km/h every time. I generally can pick up things pretty well, I think, against different players with their serving patterns, and her’s was really difficult. I’d never really picked up on that with her before.”

“I want to get my ranking back to, firstly, a spot where I’m gonna be main draw of events. I don’t want to rely on wildcards and I don’t wanna play quallies every week. So I think if you can get back top 40, you’re pretty much main draw everywhere. I think by Roland Garros, I’d definitely like to be seeded because that definitely helps things (laughter). I’m gonna target the clay-court season. As far as my game, there’s certainly things we’ve looked at to really hone in on. I’ve got real specific goals on court that I want to be working on. Even looking at those serve stats, I know I’ve gotta win more service games. My service game percentage isn’t where it should be. First serve points won needs to be better. I’ve got a good first serve – I know can work on that and I should be able to improve it. And stay healthy again.”