De Minaur into Next Gen semifinals

Thanks to a four-set victory over Andrey Rublev, Alex De Minaur clinches a semifinal berth at the Next Gen ATP Finals in Milan. 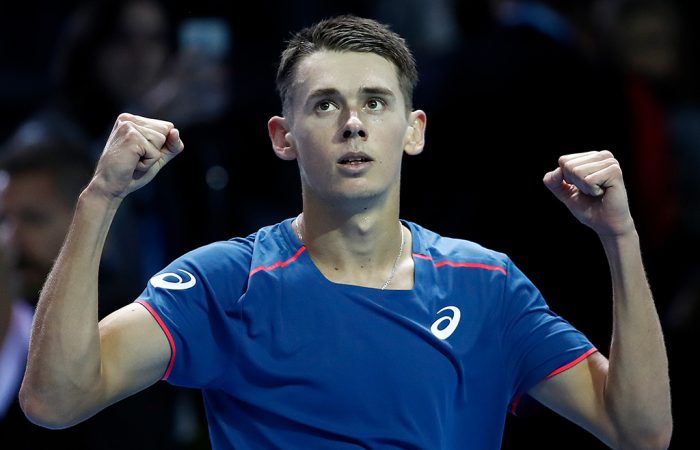 Alex de Minaur beat Andrey Rublev in four sets at the Next Gen ATP Finals to clinch a spot in the semifinals.

“It was great. I knew coming in it was going to be a really tough match and I was going to have to play some really good tennis and not leave too many balls short because his forehand is seriously one of the most dangerous weapons out there on the Tour,” de Minaur told atpworldtour.com.

“I’m really happy with my win. I thought I executed my gameplan really well and served really well.”

De Minaur’s 84-minute victory was his second over Rublev this year; he also beat the young Russian in a thrilling semifinal at the ATP event in Washington DC in August.

De Minaur tops Group B with a 2-0 win-loss record, after beating Italian Liam Caruana in his first match.

He’ll face Taylor Fritz in his final round-robin match on Thursday evening (local time) before turning his attention to the semifinals.

“It’s not over yet. Every match counts,” de Minaur said.

“I’m very happy with my win today and it’s been a great year, but tomorrow’s another day and you’ve got to get back out there and keep doing the same.”