Jordan Thompson takes home the ATP Challenger title in Traralgon for the second time. The Sydneysider returns to the world's top 100 as a result. 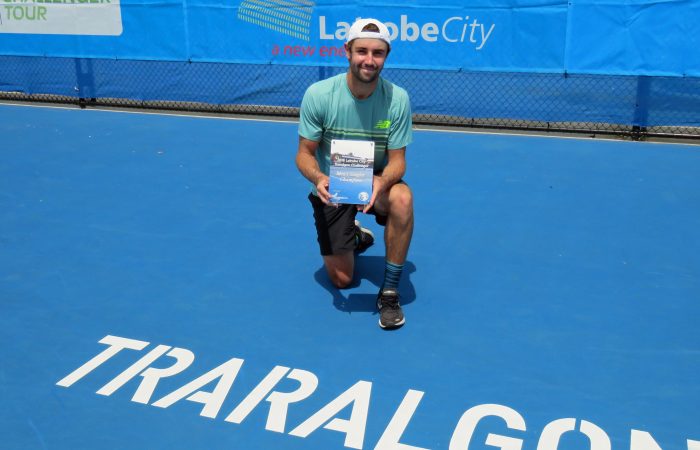 The win marked Thompson’s first over the Japanese world No.98 in their four outings.

“It feels great to beat a player I haven’t beaten before especially when he’s in good form, he just won an ATP Tour event (Shenzhen) so I’m pretty happy with myself,” he said.

The fourth seed came ready to play on Sunday, getting the early break. In a flawless serving display which saw Thompson strike 100 per cent of first serves along with four aces, he was able to claim the first set before the encounter became much closer with extended rallies pushing both players.

In the end, the Australian got the edge and claimed his second Traralgon title, after lifting the trophy previously in 2016.

“Serving definitely helped me today out but from back I did really well also. I just didn’t miss too many balls so I made it tough for him,” Thompson said. “It was perfect tennis conditions and it was just good to be out there.”

Thompson, 24, has enjoyed a fruitful year at ATP Challenger level, this title coming on the back of a run to the final in Calgary last week.

He has now played in a total seven finals for two wins.

“It’s good to win today. I’ve made a lot of these finals, I’ve done well to get there and I know it’s not easy to win them,” he said.

Thompson’s consistent form of late has seen him climb back into the world’s top 90 where he can now mount a challenge to target his career-high of world No.63.

A solid showing at the ATP Challenger event in Canberra this week will undoubtedly help his cause.

“I know I’ve got it in me,” he said. “To be back up there is great, but obviously I don’t want to stop there, I just want to keep it rolling, so Canberra is another opportunity. We will reassess after that and see where I’m at.”