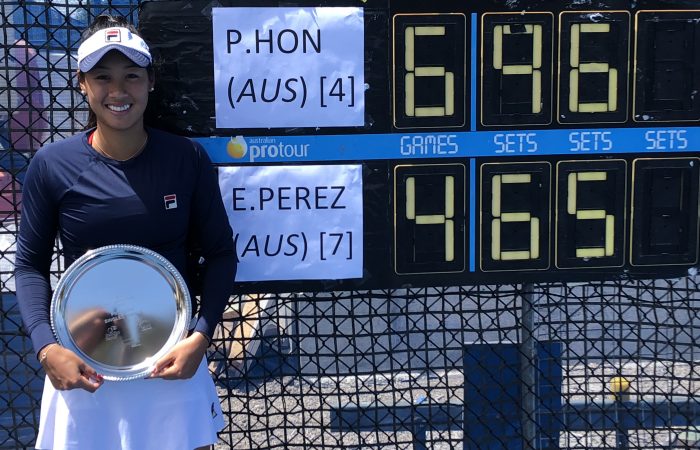 “I’m just really happy I got through because I was obviously in a good spot and she was playing really well,” Hon, 20, said after earning her first title for the year and edging ever closer to a world ranking inside the top 150.

Perez was quickly out of the blocks as the match began and took the early advantage but the fourth seed was able to close the gap and eventually take the first set.

Perez, seeded seventh, was not to be counted out and lifted to equal proceedings. An enthralling final set remained on serve until the 12th game when Perez double-faulted on match point.

Although the disappointment will be evident, the rich vein of form has catapulted her to career-high world ranking well inside the top 200 for the first time.

She also walked away with the doubles title; combining with Arina Rodionova and seeded No.1, the duo on Saturday defeated the unseeded Japanese team Eri Hozumi and Risa Ozaki 7-5 6-1 for their third doubles title of 2018.

For Hon, winning on home soil again was a major boost. “I’ve always struggled a little bit in Australia but I think after playing internationally a lot this year and seeing the bigger picture, it’s made a difference,” she said. “I think being mentally just a lot more stable and being able to reset in difficult situations.”

The Australian Pro Tour now moves to the next ITF $60,000 event in Canberra, where Hon heads with some added, but contained, confidence. “I still don’t have too high expectations, I will just it take one match at a time,” she said.