Hives bounces back in Toowoomba

After missing a large part of the year through injury, Zoe Hives bundles out seeded Brit in Toowoomba. 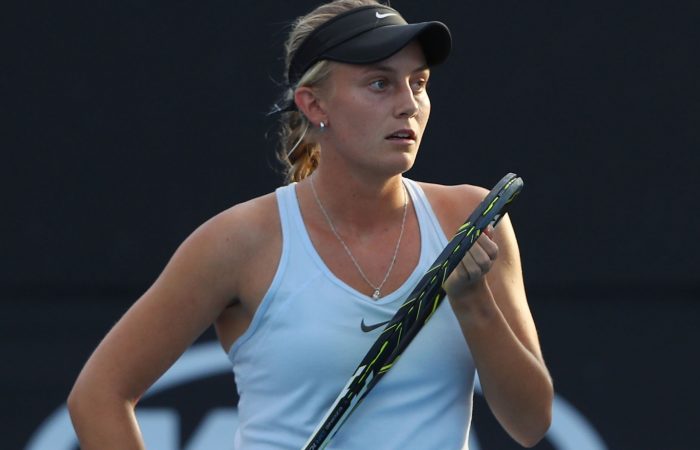 Zoe Hives’ return to the Australian Pro Tour has been given a boost with an upset victory over British fourth seed Katy Dunne at the 2018 Hutchinson Builders Toowoomba International on Tuesday.

“I missed a few too many early but after the first set I started to see it right,” Hives said. “I knew she’d come out and play well but I also knew that I could do it (after beating Dunne in their previous encounter).”

After posting some career-best results earlier in the year – including a maiden title in Playford and semifinals in Burnie, Launceston and Canberra – the 21-year-old missed a large part of the season with injury.

“I have hardly played in the last six months,” Hives said. “After those results, I had a bit of a training block to try and get to the next level and get my body sorted. I went to Singapore and after about a week I got bone stress in my wrist. That’s was kind of it until Cairns a few weeks ago.”

Having now fallen outside the world’s top 300, Hives admits her start to the 2018/19 Australian Pro Tour has been difficult, but Tuesday’s win has helped resurrect the Victorian’s self-belief.

“I was playing really well so it’s just about finding it again,” she said. “I know I can get it back and today was better again. A bit more like the start of the year.”

It was also a good day for Alexandra Bozovic who defeated Italy’s Georgia Brescia 1-6 6-4 6-0. She will await the victor of No.5 seed Ellen Perez – a consecutive finalist in Darwin and Brisbane recently – and wildcard Maddison Inglis. The winner to potentially face top seed Olivia Rogowska in a quarterfinal.

Third seed Destanee Aiava and Cairns winner Astra Sharma (No.6) will both open their campaigns on Wednesday, each facing qualifiers, while Sydney’s Abbie Myers must contend with British second seed Gabriella Taylor.