Alex de Minaur comes through a thriller while Nick Kyrgios is on powerful form in the first round of the Japan Open in Tokyo. 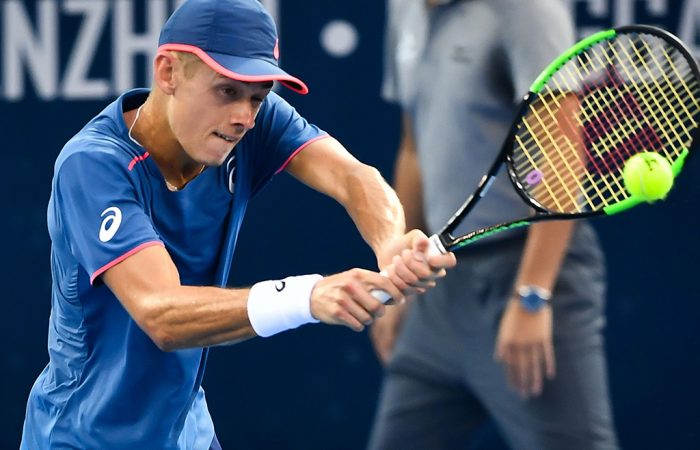 Alex de Minaur and Nick Kyrgios made it through to the second round of the Japan Open with contrasting, but similarly impressive, wins on Wednesday.

Kyrgios served 20 aces in his first-round win over Yoshihito Nishioka, converting just two of nine break-point opportunities but proving clinical when it mattered most.

Kyrgios was dominant on his forehand wing, hitting 15 winners, but 51 unforced errors allowed Nishioka, who won his maiden ATP title last week in Shenzhen, to push him to two tough sets.

Sealed with a sparkler 🙌

“He’s obviously riding a lot of confidence from last week, coming to your home and playing in front of your home crowd, he was probably looking forward to it today.

“It was a good match, I thought. He had a chance in the second set, but it’s never easy playing one of the home favourites.”

Next up for Kyrgios is a second-round showedown with French eighth seed Richard Gasquet.

De Minaur then came through an epic contest against French veteran Gilles Simon 6-7(1) 7-6(5) 6-2, saving four match points over the course of three hours and five minutes.

“It was definitely a tough match,” said Anderson.

“Playing Matt, he has great hands and feel, he moves very well, he uses pace very well and I think he was doing it very effectively through almost the whole match.

“I really had to dig out some break points in the second set, which I think was really important in the end. Fortunately I was able to really pick up and play a great tie-break.”

The 👿 does it again. 🙌@alexdeminaur battles past Gilles Simon 6-7(1) 7-6(5) 6-2 to set a round two encounter with Stefanos Tsitsipas in Tokyo. #rakutenopen pic.twitter.com/LdDEc0Ngq7