As the Australian Pro Tour arrives in Brisbane, Blake Ellis joins seeded Queenslanders Ben Mitchell, Thomas Fancutt and Michael Look in the hunt for a title on home soil. 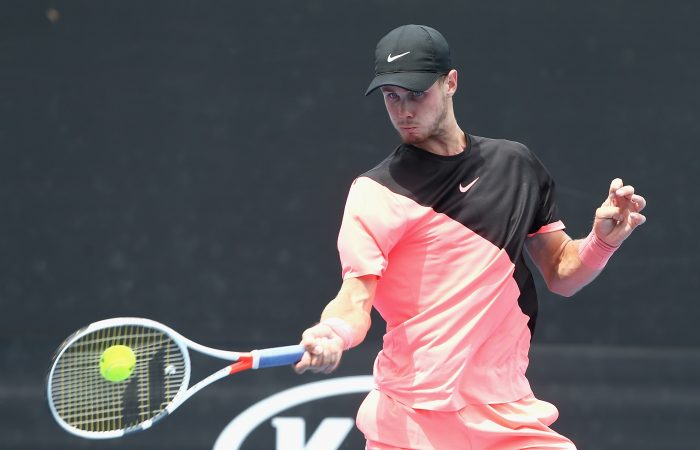 Local teenager Blake Ellis has arrived at the 2018 Brisbane QTC International this week carrying the mantle of second seed.

“It feels good to finally play a tournament at home,” Ellis, 19, said. “It’s been a while.

“I haven’t been seeded highly in any of the Futures that I’ve played, so it comes with a bit of pressure, but I’m looking forward to it. Hopefully I can put a few matches together and be happy with the way I play.”

The world No. 443 admits to having had a mixed year on tour in 2018, but is content with his performance overall.

“It started well with a wildcard into the Aussie Open (qualifying), so that was a highlight, and then I’ve just been trying to play a mix of Challengers and Futures to try and get my ranking up. I’ve had some pretty good results.”

With the draw headlined by top seed Bradley Mousley (SA) and local Queenslanders Ben Mitchell (No.4) and Thomas Fancutt (No.5), all competing alongside a number of internationals from China, France, Great Britain, Japan, New Zealand and the USA, Ellis with be met by some stiff resistance in Brisbane.

“There’s plenty of good players and each match is going to be difficult,” he said. “I’ve got to be ready.”

Ellis faces wildcard Socrates Leon Tsoronis in the opening round. “I got the better of him three years in Toowoomba but he’s been around for a while now and he’s a tough competitor,” he said of his opponent.

Should Ellis be successful he may be eyeing off a potential quarterfinal with either recent Cairns champion Jacob Grills or another fellow Queenslander in Michael Look, the No.7 seed. Both Grills and Look were semifinalists in Darwin last week.

Mousley opens his campaign against China’s Aoran Wang and would be on track to meet Fancutt in a quarterfinal all going to plan. Mitchell and Brit Brydan Klein (No.6) are also lurking in the top half, along with Lucas Vuradin, a quarterfinalist in Darwin.