China Open: Stosur pushes Pliskova, but falls in first round

Sam Stosur fired early but could not withstand a magnificent comeback from No.7 seed Karolina Pliskova in the first round of the China Open. 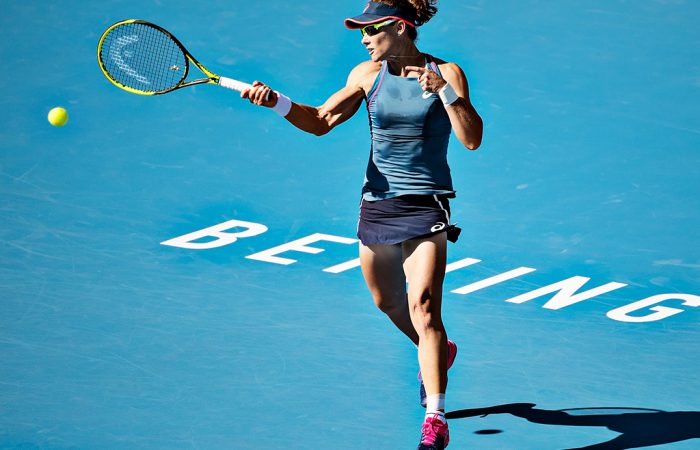 Sam Stosur began strongly before falling in two tight sets to world No.7 Karolina Pliskova at the China Open on Monday.

Stosur served intelligently and crushed her forehand en route to a 4-1 lead before the Czech reeled off nine straight games and eventually ran out a 6-4 6-4 winner.

“Obviously I started out really well. Maybe she was a little bit surprised how I was trying to stay really up the court, I was returning pretty well,” Stosur said.

“I’d probably be really interested to watch that back and see what Stubbsy (Rennae Stubbs) said to her (during the coaching timeout at 4-1) because things obviously really changed at that point … I didn’t obviously try and change anything. What I was doing was working. Maybe the level of it dropped a little bit. I was always expecting her to improve her level – she’s a good player so she’s gonna find a way.

“I’m not exactly sure why things turned so dramatically in the end there.”

After a slow start, @KaPliskova rallies to defeat Stosur 6-4, 6-4 @ChinaOpen to reach the second round. pic.twitter.com/l6OlIOpRr9

Indeed, Stubbs has been working with Pliskova on and off since 2017 and whatever she said to Pliskova resonated.

Before long the seventh seed had completely turned the match around in building a 6-4 4-0 lead.

From 5-2 down, Stosur tightened the second set up but Pliskova – with plenty to play for given she’s on the cusp of qualifying for the WTA Finals in Singapore – served out the match on her second attempt.

For Stosur, currently ranked 67th, it was a fifth straight loss dating back to the WTA tournament in New Haven.

“Every defeat is hurting at the moment. It’s just annoying because when you lose first round you’re getting (only) one match a week. It’s really hard to build momentum,” she said.

“Regardless of if you’re playing someone who’s in the top 10 or not, you just wanna do better than this.

“All you can do is get out there and keep trying. It’s not like I’m taking five days off before these matches … at the end of the day, winning a match, you can’t replicate that any other way.”

The Australian left for her Asian trip assuming she would be playing the qualifying rounds in Wuhan and Beijing.

Yet she received main-draw wildcards at both tournaments.

“In hindsight you might question it (receiving wildcards over going through qualifying). But if someone’s going to offer you a wildcard into the main draw of Beijing, you’re certainly never going to turn it down,” Stosur said.

Stosur will play her final event of the season in Hong Kong next week, before a three-week off-season holiday.

She said she will try to continue implementing the work she’s been putting into her game.

“I’ve been trying to work on my forehand and footwork technique a lot. Basically to get more on the front foot, stepping into the shot,” she revealed.

“With my grip and the way I’ve always played, I can hit off my back leg but I come up the back of the ball. That does not work in women’s tennis any more on hard court.

“So I’ve really been trying to get out and then step into the ball, and then that promotes your racquet going through more. We’ve done so much footwork on that.”