Bernard Tomic has capped a remarkable week that began in qualifying at the ATP Chengdu Open, saving four championship points against Fabio Fognini to win a thrilling final. 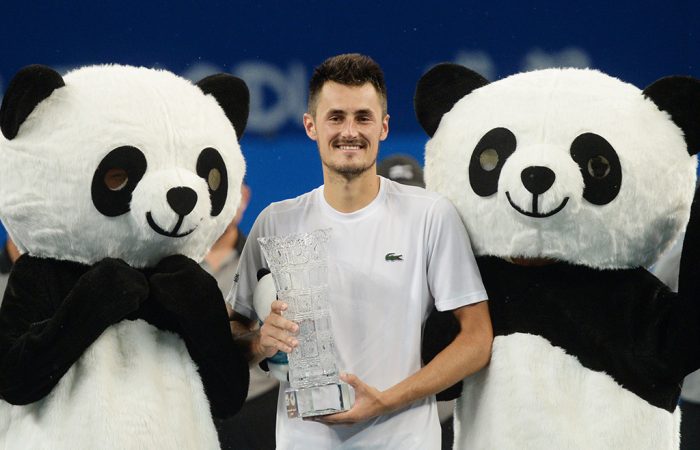 He hadn’t played someone ranked as high as Fognini in a year – let alone claimed a win against such player.

But Tomic finished off an long week in fighting style.

Coming into the tournament as a qualifier ranked 123rd in the world, Tomic won seven consecutive matches to take out the title.

“I think all week I was lucky,” Tomic said.

“I played really well the whole week – I’m so happy I won.”

He’s projected to rise to around No.77 in the world and looks to have safely secured automatic entry to next year’s Australian Open, a tournament he failed to qualify for in 2018.

A major outsider against the top-seeded Italian, Tomic consistently frustrated his opponent with excellent ball placement and a willingness to stay in points.

Tomic raced through the first set 6-1 before the Italian found his feet in the second to level the match.

The third set became an arm wrestle: Fognini breaking to start the decider before Tomic won the next three games. Fognini then levelled again.

From there the match stayed on serve with Fognini seemingly grabbing control of the tiebreak when up 6-3 on serve.

But he double faulted on his first match point, and missed his second when a Tomic forehand clipped the tape and died on Frgnini’s side of the net. Back on serve, Tomic erased the third match point with an ace out wide.

Fognini earned a fourth match point when Tomic ended a long rally with a backhand error, but lost that one too when he played a forehand well long of the baseline.

Two points later, the Aussie struck an inside-out forehand winner and collapsed to the court after clinching his first ATP title since Bogota in July 2015.

Tomic finished the match with 12 aces, and by winning a third-set tiebreak Tomic took his 2018 tiebreak record to an incredible 20-4.