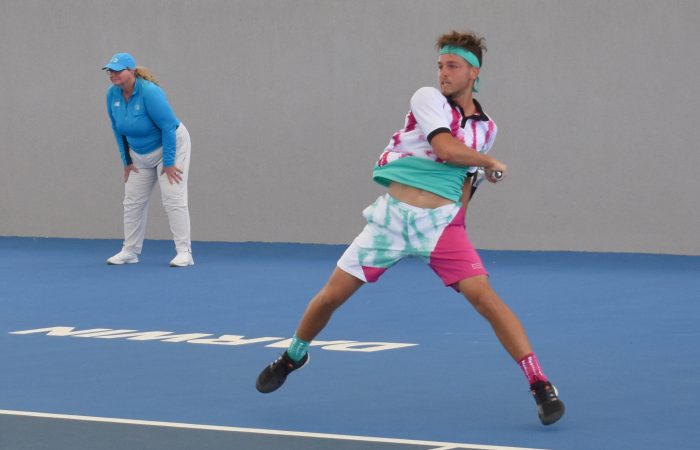 Competing in his first Australian Pro Tour quarterfinal, Lucas Vuradin – the only unseeded player in the final eight – went down fighting to Yuta Shimizu at the Darwin Tennis International on Friday.

The promising Victorian 19-year-old was found a little wanting at critical moments as the Japanese top seed moved into the semi-finals 6-2 6-2.

“I felt like I was in every game we played,” Vuradin said. “I was pushing and I had my chances but I couldn’t get the job done. He just had more match experience, especially under pressure, and he came up with goods when he needed to.”

Vuradin has enjoyed a solid year thus far and hopes for further improvement as he heads into the Australian summer.

“Getting to a quarterfinal in my home country is exciting. I’m really happy with what I’ve achieved,” he added. “My ultimate goal has always been to get to (an Australian Open) Wildcard playoff. If I keep doing well I will definitely give myself the best shot possible.”

Asked what has been the key to his growing success, Vuradin said it’s a bit of everything, but maybe more of a mental thing. “I’ve been keeping my head in matches more. I just feel like I’m doing better with that aspect of my game.”

“Even before I get on court, I’m confident in myself to play the best tennis I can.”

Centre court in Darwin saw an intense showdown between another Victorian, Jacob Grills, and Brydan Klein, the two slugging it out from the baseline and producing consistently high-quality tennis throughout their match. Grills eventually came out the victor in two hard-fought sets 7-6(2) 7-5, repeating his victory over the Brit in last week Cairns final.

Grills will now face Shimizu in a bid for two consecutive titles.

On the other side of the draw, fourth seed Michael Look continued his impressive run defeating fellow Queenslander Tom Fancutt (No.3), while Brit Evan Hoyt (No.6) bundled out second-seeded Victorian Jeremy Beale in straight sets.