Astra Sharma has capped off the Cairns Tennis International claiming the title over Destanee Aiava. 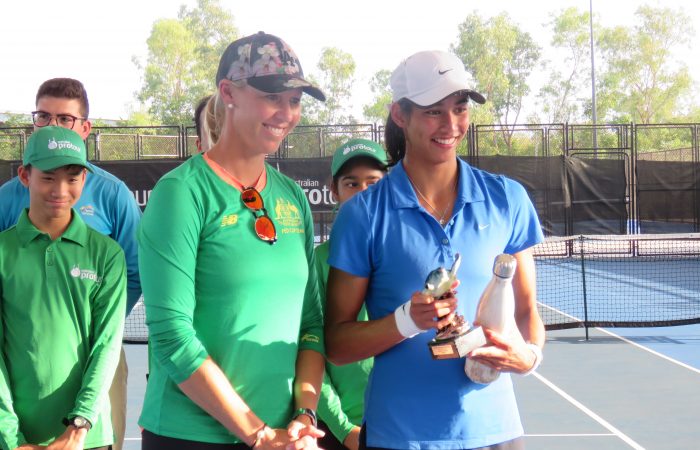 “It was a long day and it takes a lot out mentally…The momentum changes quite a lot,” Grills said.

“I played really well in the first set and seemed to have control of most rallies but he started to serve great after that and it was tough to get into games. It got really close in the end and it was just good to get over the line.

In a twist of events, the women’s singles final was moved to be held in Darwin yesterday, Monday 24 September, following unforeseen inclement weather, which caused the final to be suspended in Cairns on Sunday with Aiava leading Astra Sharma (WA) 6-0.

The final was being readied to be completed in Cairns at 7.00 am this morning, however after continual unseasonal weather the decision was made with the agreement of all parties including both players, the local venue and the ITF to move the match to the next stop on the Australian Pro Tour being Darwin.

Western Australia’s Astra Sharma eventually secured the Cairns Tennis International women’s singles title in a tense battle after coming back from a 6-0 3-0 Aiava lead to secure the second set in a tiebreak. Sharma proving too strong in the third set and running away to take out the Cairns title, and her third ITF tournament for the year, 0-6 7-6 6-1.

“It feels really good to secure the title because I didn’t really expect it after my first set in Cairns,” Sharma said.

“I’ve been playing pretty high quality tennis all week, just been working on a few things that I needed to execute during matches.

“The atmosphere in Cairns was unreal all week, there was a really decent crowd which was electric so it shame I didn’t get to play my best tennis in the final before it moved to Darwin.

“I’m hoping to continue my form in Darwin and keep playing the way I have been,” Sharma continued.

Tournament director Marc Wittmann was thankful for the support from the Cairns region.

“On behalf of the tournament organisers I’d like to thank the Cairns Regional Council, all the sponsors and all the fans for their persistence through yesterday’s long day and for their understanding,” Wittmann said.

“We’d also like to thank the many volunteers that have contributed to this event over the past nine days and for their tireless work especially yesterday in trying to resume the match.”

“We had a highly successful tournament, with every day running perfectly. The rain delays yesterday were unfortunate but the crowd staying right until the end and our amazing ballkids drying the courts and keeping everyone’s spirits up capped the week off in style. Thankfully we were able to ensure both singles finals were finished.”

The Australian Pro Tour is a combination of International Tennis Federation (ITF) women’s and men’s and ATP Challenger tournaments and is a stepping stone to introduce tennis players to the professional ranks and a pathway to the WTA and ATP tours.