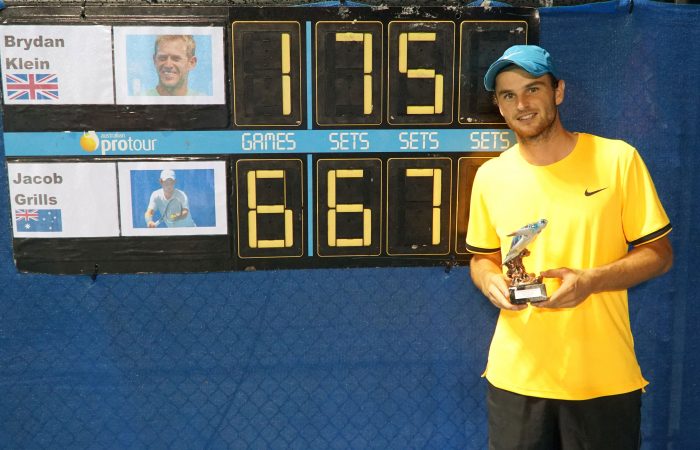 Jacob Grills has claimed his maiden Australian Pro Tour title with a memorable 6-1 6-7(2) 7-5 upset victory over British third seed Brydan Klein in a severely rain-affected final at the Cairns Tennis International on Sunday.

It took the Victorian No.7 seed nearly three hours on court and several interruptions in play to post the win in a match that saw both players struggle with conditions.

“It was a long day and it takes a lot out mentally,” Grills said. “The momentum changes quite a lot.

“I played really well in the first set and seemed to have control of most rallies but he started to serve great after that and it was tough to get into games. It got really close in the end and it was just good to get over the line.

The 23-year-old world No.746 has had a mixed year on tour in 2018, backing himself to play more at the higher ATP Challenger level, but this title – and the fact he stormed to the Cairns final with the loss of only 13 games – will boost his confidence ahead of the upcoming Australian spring/summer of tournaments.

“To be honest, I’ve been playing really well, I’ve just been losing to guys that got the better of me on that particular day,” Grills said. “You come up against some really good guys and it’s tough some weeks, but I believe I’ve been playing a lot better tennis.”

Jacobs capped off a successful week in Cairns after also making a run to the doubles final, where he and partner Calum Puttergill were stopped in straight sets by American Dusty Boyer and Brit Evan Hoyt.

In the All-Australian women’s final, third seed Destanee Aiava rushed out to take the first set 6-0 over the No.4 seed Astra Sharma before another rain delay saw play suspended for the day. The match is now scheduled to continue on Monday.